Think last month was hotter than usual? Yes, by far

Almost every place in the 48 contiguous states was warmer than normal last month, breaking a record that dates to 1934. And most of a wide swath of the nation, from the Texas Panhandle to Chesapeake Bay, had the warmest May ever. The average temperature in May, 65.4 degrees, was more than 5 degrees above normal, according to the National Oceanic and Atmospheric Administration's latest climate assessment.


The May average "swept by the previous high mark of 64.7 degrees," set during the Dust Bowl era, Jason Samenow writes for The Washington Post. "One of the main reasons May 1934 was so hot was because it was so dry, posting the least precipitation for the month on record. When the land surface is dry, it heats up faster. . . . In May 2018, temperatures soared to record levels even without as much help from dry soils. Precipitation was a hair above normal averaged over the nation. Maryland, hit by major floods in Frederick and Ellicott City, had its wettest May on record. So did Florida. Asheville, N.C., posted 14.68 inches of rain, its wettest month in history."

Samenow adds, "The toasty pattern presented a massive contrast from April, which ranked the 13th-coldest on record, more than 2 degrees below average. Eight states had their warmest May on record: Virginia, Arkansas, Illinois, Indiana, Kentucky, Missouri, Ohio and Oklahoma." 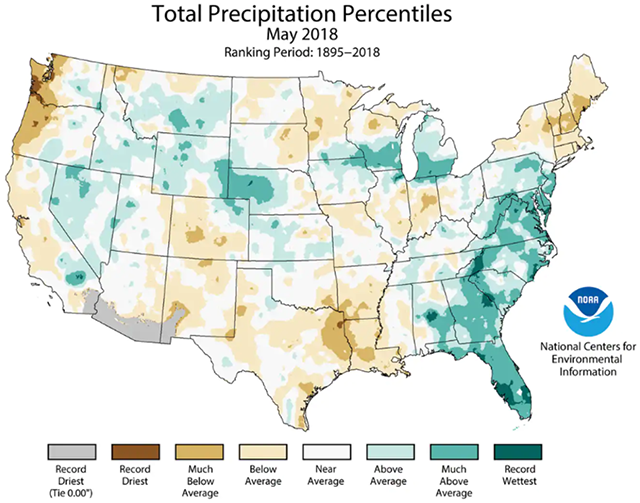