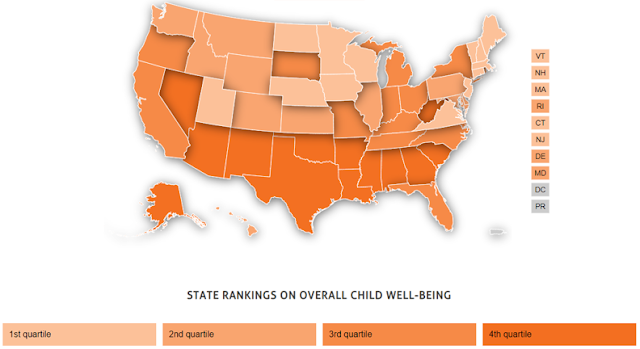 The Annie E. Casey Foundation has just released its 2019 Kids Count Data Book, which provides state-level data about factors that influence children's well-being, such as education, health, economic well-being, and family and community. Local data, which provides a vast amount of information that can inspire and inform news reporting, will be released in November.

The findings in this year's report provide "dramatic" demographic and geographic contrasts since 1990, when the report was first issued, says Lisa Hamilton, the foundation's president and CEO. For example, in 1990, 69 percent of American children were white; in 2017 it was 53%. And the share of children with at least one immigrant parent has doubled since 1990, from 13% to 26%. Meanwhile, every state where child population growth is higher than the national average is in the South or West.

As far as well-being of children, "While we have stepped up for kids in some areas [since 1990], we have fallen profoundly short in other ways," Hamilton writes. "Notably, we have failed to reduce racial and ethnic disparities among children and dismantle the obstacles that so many children of color encounter on the road to adulthood. Addressing these failures remains critical, as many states that have continually been near the bottom of the Foundation's annual Kids Count index rankings are the same ones that have seen tremendous growth in their child population."