Wyoming newspapers won three of the five general-excellence awards in the 2019 Better Newspaper Contest of the National Newspaper Association, the main trade association for community papers. The Rural Blog plans to excerpt some of the individual winning work; for now, here are the winners in the General Excellence category: 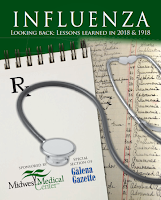 The contest categories include some open to both dailies and non-dailies. One of those is the Civic/Community Service Award, won by The Galena Gazette for a 32-page section looking back at the influenza epidemic of 1918, partly as a device to remind readers to get their flu shots. "The influenza project actually started 10 or more years ago when I did a series of stories about how the flu pandemic of 1918 impacted Galena," Publisher Carter Newton told us. "Late last summer, based on issues with influenza in the community and our country in January-March of 2018, we proposed to our local hospital that we dust off the series and add current stories about influenza, the impact of influenza in 2018, the importance of vaccination, how the hospital and health authorities would handle a health crisis today." The hospital sponsored the section, at left. The Vilas County News-Review of Eagle River, Wis., won second place for its "Warm the Children" campaign that collected $80,000 to buy coats for 591 kids in a county where a national snowmobile tournament is held. The Buffalo Bulletin won third place, but its entry was not specified in the contest list.
Written by Al Cross Posted at 6/13/2019 12:20:00 PM