Death in Mud Lick digs into the opioid crisis in rural West Virginia, underlines the value of local journalists 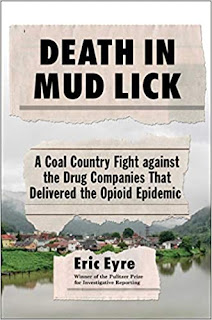 A new book from former Charleston Gazette-Mail reporter Eric Eyre takes a deep dive into the opioid epidemic through the lens of Kermit, W.Va., a town of 382 people whose pharmacy distributed 12 million pain pills in three years. Death in Mud Lick details one woman's fight to seek accountability from major pharmaceutical companies after her brother's overdose death.

"The story is also a reporter’s firsthand account about what it’s like to mine for the truth while working for a newspaper fighting for survival on multiple fronts, as greedy corporate owners make serious budget cuts to maintain the paper’s profit margins and as combative politicians stonewall," Ralph Berrier Jr. reports for The Roanoke Times. "Death in Mud Lick is for readers who root for the underdog, who want justice served and who love newspapers."

Readers should appreciate the scale of Eyre's battle and what it accomplished, ProPublica reporter Ken Armstrong, a former colleague of Eyre's, writes for The New Yorker. Eyre researched and wrote the book while he was still cranking out near-daily stories for the paper, facing off against the powerful drug industry with little funding, decrepit equipment, and an increasingly difficult battle with Parkinson's disease. He persevered, and "his reporting led to restrictions on prescriptions, greater tracking, more transparency. He shamed an industry and saved lives. Working at a small newspaper, Eyre made a big difference," Armstrong writes.

For Eyre, who won a Pulitzer Prize in 2017 for his coverage of the opioid epidemic in rural West Virginia, the book perhaps serves as his final bow in journalism: With his Parkinson's getting worse, he submitted his resignation letter last week; Armstrong reports:. "The same day his book came out, Eyre left the paper."
Written by Heather Chapman Posted at 4/03/2020 11:00:00 AM