The rural Midwestern economy improved slightly over the past month, but is still below pre-pandemic levels, according to the August edition of Creighton University's Rural Mainstreet Index. The index is a survey of bankers in about 200 rural communities with an average population of 1,300 in 10 states where agriculture and energy are critical to the economy: Colorado, Illinois, Iowa, Kansas, Minnesota, Missouri, Nebraska, North Dakota, South Dakota and Wyoming.

"The overall index for August increased slightly to 44.7 from July’s 44.1, but still well below growth neutral, though it was up from July’s 44.1 and April’s record low 12.1. The index ranges between 0 and 100 with a reading of 50.0 representing growth neutral," Creighton economist Ernie Goss reports. "Farm commodity prices are down by 10.4 percent over the last 12 months. As a result, and despite the initiation of $32 billion in USDA farm support payments in 2020, only 8% of bankers reported their area economy had improved compared to July, while 18.4% said economic conditions had worsened."

Other things of note from the report: 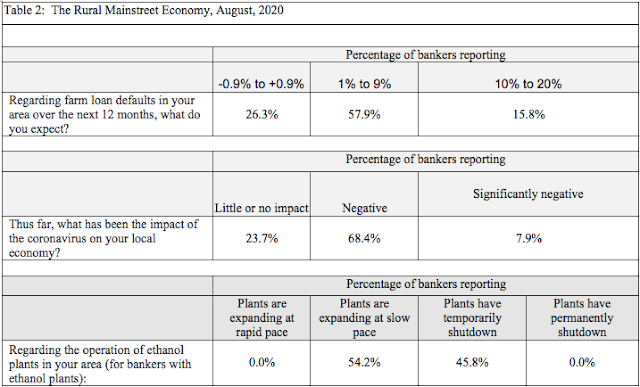