A May survey of rural bankers in 10 Midwest states that rely on agriculture and energy showed continued optimism about the economy, with the overall Rural Mainstreet Index jumping from April's 69 to a record 78.8. The index is a survey of bankers in about 200 rural communities with an average population of 1,300 in Colorado, Illinois, Iowa, Kansas, Minnesota, Missouri, Nebraska, North Dakota, South Dakota and Wyoming.
"Strong grain prices, the Federal Reserve’s record-low interest rates, and growing exports have underpinned the Rural Mainstreet Economy. Even so, current rural economic activity remains below pre-pandemic levels," reports Creighton University economist Ernie Goss, who compiles the index.
April marked the sixth straight month the index has remained above growth-neutral, with over 60 percent of bank CEOs reporting their local economy expanded between April and May. However, almost nine out of 10 bankers said unfilled jobs in the area are restraining economic growth. 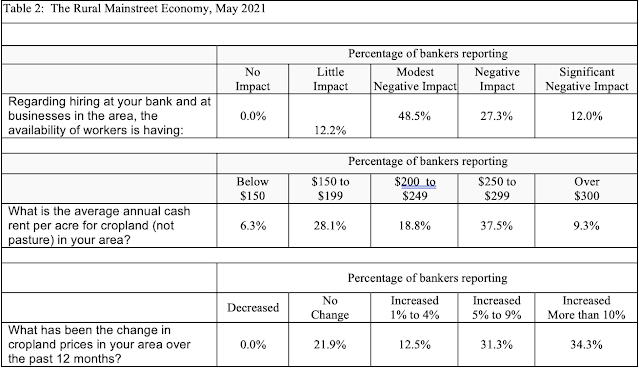