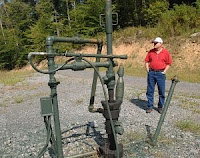 A list of last year's best investigative journalism, compiled by California Watch Editorial Director Mark Katches with the suggestions of top editors and reporters around the nation, includes December stories by Daniel Gilbert of the Bristol Herald-Courier, circulation 33,000, about the mess Virginia and its natural-gas companies have made of a law and program to develop the state's coalbed methane and pay royalties to those who have a claim on it. (Herald-Courier photo by David Crigger) To read the main story that began the eight-day package, click here. For the second day, here. Other stories reported how coal companies block access to royalties, how the state escrow fund is bleeding money, how gas companies fail to pay into the fund, how small landowners are left without royalties. As the series concluded, the state Oil and Gas Board voted to audit the fund.

J. Todd Foster, editor of the Media General paper, wrote in a column that the problem "involves millions of dollars and affects thousands of Southwest Virginia property owners," many of them scattered across the country, and various "forms of malfeasance, corruption and outrage." He said the gas companies "are getting rich. The moms and pops who own the land are getting screwed" and "can’t afford to battle deep-pocketed corporate armies of attorneys bent on stringing the process out over years." He detailed how the story developed, and how Gilbert reported it over 13 months. "This is a classic example of how a newspaper dedicated to a community can mine a story that no one else would have ever tackled for its sheer complexity and obscurity."

Foster, who has a pugnacious streak we like, couldn't resist ending his column with this paragraph: "The rest of you also need to ponder this fact: If newspapers fall by the wayside as victims of a fragmented media landscape, much of it free and offered on the Internet by authors untrained in journalism or its ethics, then you can kiss goodbye watchdog reporting that keeps government and the private sector from straying outside the lines of the law." Amen!
Written by Al Cross Posted at 1/18/2010 09:00:00 PM