Hearing explores difficulties for expanding rural broadband, 'a basic necessity, not a luxury' 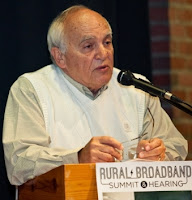 G.C. Kincer, left, brought wireless broadband to downtown Whitesburg, Ky., population 2,100, because no one else would. "About the time he hit 50 customers, he said, 'the phone company sort of speeded up their investment,' and provided broadband at lower prices, so he shut down his service. "Then BellSouth slowed its expansion into this part of rural Eastern Kentucky," reports Tim Marema of the Center for Rural Strategies for its Daily Yonder.

“That’s when I figured out that if we were going to solve this problem of broadband access, it’s going to have to be a community solution,” Kincer said at a hearing yesterday in Whitesburg, held by the center, Free Press and the Center for Media Justice "to gather stories about how broadband access and other communications policies affect rural communities," Marema writes.

Kincer and Jonathan Adelstein, administrator of the Rural Utilities Service in the U.S. Department of Agriculture, agreed that lack of competition delays provision of broadband in rural areas, and "Citizens who spoke at the hearing described how broadband access has become a basic necessity, not a luxury," Marema reports. (Read more)