Lots of good rural journalism in Sigma Delta Chi Awards to be presented June 21 in D.C.

When the Society of Professional Journalists presents the Sigma Delta Chi Awards in Journalism on June 21 in Washington, many of the honors will be for rural journalism, and not just because many awards have a category for newspapers with circulation up to 50,000.

The award for Public Service Journalism in small newspapers goes to the Springfield News-Leader and Executive Editor David Stoeffler for “Making a Difference in the Life of Every Child,” a series of more than 40 front-page stories about poverty, hunger, abuse and neglect among children in southwest Missouri. The judges called the presentation "stunning," and it can be read online: Link 1 | 2 | 3 | 4 | 5 | 6 | 7 | 8 | 9 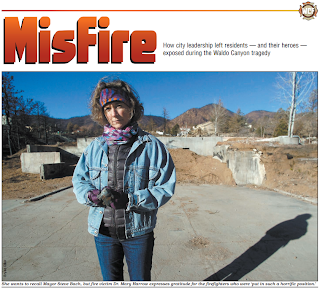 The public-service award for non-daily publications goes to Pam Zubeck of the Colorado Springs Independent for “Fire and failure: the Waldo Canyon tragedy,” in which poor preparation and organization by local officials exacerbatd a fire that killed two people and destroyed 350 homes. A PDF is here. The award for public service by magazines with regional or local circulation goes to Emily DePrang of The Texas Observer for “Life On the List,” a story about men who committed sex crimes as juveniles and are spending the rest of their lives on the state's sex-offender list.

The Deadline Reporting award for small daily newspapers goes to “Former soldier held in deaths,” by Mark Collette of the Corpus Christi Caller-Times, who started his story about a triple murder: "Michelle Hughes thought she was free. In the end, she couldn't escape her troubled relationship with a disturbed former soldier, and her last dash for help ended short -- in a bloody handprint on the front of her sister's house." (Read more)

The Investigative Reporting awards go to Mary Beth Pfeiffer of the Poughkeepsie Journal for "No Small Thing", a story about mistreatment of, and failure to disgnose, Lyme disease; and to Marc Perrusquia and Grant Smith of The Commercial Appeal in Memphis for "Cash Crop", about lax enforcement of questionable tax breaks for farms and forests.

The Editorial Writing award for newspapers of up to 100,000 circulation goes to Jamie Lucke of the Lexington Herald-Leader for “War on coal,” a series of editorials debunking that claim by the coal industry, pointing out the dangers it poses for coalfield residents and holding accountable state and federal regulators. The series is here: Link 1 | 2 | 3 | 4 | 5

The award for General Column Writing in small newspapers goes to Steve Matrazzo of The Dundalk (Md.) Eagle, who "exemplifies the best in persuasive writing," the judges said. His entry is here. 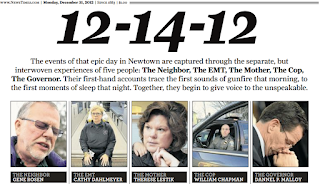 The Feature Reporting award for small dailies went to the staff of The News-Times of Danbury, Conn., for "12-14-12", a long, retrospective story about the school massacre in nearby Newtown, written by Linda Tuccio-Koonz, Ken Dixon, Robert Miller, Dirk Perrefort and Nanci G. Hutson.

The award for Sports Column Writing in newspapers with circulation up to 100,000 goes to Matt Calkins of The Columbian in Vancouver, Wash. The judges said his entry was "wonderful, refreshing, inviting [and] scary." Read it here: Link 1 | 2 | 3 | 4 | 5

Photographers from The Gainesville (Fla.) Sun won two awards in the competition among newspapers with circulation up to 100,000, regional magazines and online publications. Doug Finger won the Sports Photography award for a shot of a Georgia Coach Mark Richt defending his injured football player to a referee by pointing to the player's bloody nose. Here's a photo gallery. The Breaking News Photography award goes to this photo by Brad McClenny, showing a fire chief trying to keep Tropical Storm Debby from sweeping part of the topwn's dock into the Gulf of Mexico. 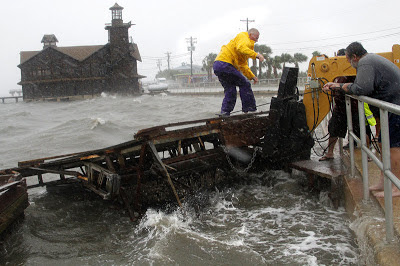 The Sun also won the class's award for Informational Graphics for “Tragedy on I-75,” about a pileup on the interstate. Download a PDF here.

The domestic oil and gas boom was the topic of two awards. “The Ugly Side of the U.S. Oil and Gas Boom,” by Brian Hansen of Platts, wins the award for Public Service in Newsletter Journalism. A new award, for Specialized Journalism Site, goes to "Black Gold Boom: How Oil Changed North Dakota." The site is here.

In broadcasting among medium and small markets (smaller that 50th largest), the award for Investigative Reporting goes to Jordan Williams, Israel Alfaro and Jenny Martinez of KRGV-TV in Texas' Rio Grande Valley for “Got Guardrails?” a scam that may have cost taxpayers hundreds of thousands of dollars; the Public Service award goes to “Newtok: Village on the Edge,” by Rhonda McBride and Eric Sowl of KTUU-TV in Anchorage (watch at Link 1 | 2 | 3 | 4 | 5); and the Feature Reporting award goes to Eric Hanson and Glen Biermann of KCCI-TV in Des Moines for “Who Are Those Guys?”, a story about a group of fraternity brothers who show up randomly at sports contests to cheer on the team that they think needs their support. To watch it, click here.

The Documentary award for small radio markets (No. 101 and above) goes to Pat Duggins, Ryan Vasquez, Maggie Martin and Stan Ingold of Alabama Public Radio for “Winds of Change,” about the Tuscaloosa tornadoes and their aftermath.

The SDX Awards will be presented Friday, June 21, at the National Press Club in Washington. A reception begins at 6 p.m., with the dinner and awards presentation beginning at 7 p.m. Dress is black-tie optional. The deadline for buying tickets is Friday, June 14. To order, click here.
Written by Al Cross Posted at 6/07/2013 02:47:00 PM