The congressman representing a rural Western Kentucky district "is leading the charge" on legislation to tighten the rules against mistreatment of show horses, in harness with his wife, "a paid lobbyist for the Humane Society Legislative Fund," John Bresnahan and Anna Palmer of Politico report. "The pair’s efforts have included sessions in which they have jointly lobbied lawmakers and aides to support the legislation, according to sources who have met with the couple."

Republican Rep. Ed Whitfield "hasn’t been shy about mentioning the connection with his wife’s employer, even noting in statements on the House floor that the Humane Society — among other organizations — supports his legislative initiatives," Politico reports. "It’s uncommon for a lawmaker to work so closely with a lobbyist on legislation, especially with a spouse who is paid to lobby on the issue. The Whitfields have caught the ire of opponents of the legislation who allege their activity is inappropriate, since the congressman’s wife, Connie Harriman-Whitfield, has worked as a registered lobbyist for the fund since 2011."

Whitfield told Politico, “I don’t view that as an ethics violation because it’s an issue that I’ve been involved in since I’ve been in Congress and this is a practice that must be and should be stopped. There’s a big difference in my mind of getting financial gain for some financial institution, to trying to prevent cruelty to animals.” He said he has a 62 percent rating on the Humane Society's latest scorecard.

Whitfield's legislation would require the Department of Agriculture to more specifically ban soring, the use of irritants, chains or other devices to alter the gait of Tennessee walking horses. Earlier, Whitfield successfully pushed for a ban on USDA inspection of horse slaughter plants, putting them out of business. Congress repealed the ban in 2011, and two horse slaughterhouses plan to open soon, having cleared almost all legal obstacles.

Whitfield's wife "is credited with playing a major role in instituting the U.S. and worldwide ban on the elephant ivory trade" as an assistant interior secretary under President George H.W. Bush, Politico reports. Originally from California, she married Whitfield in 1990 when he was a Democrat and a Washington lobbyist for Jacksonville-based CSX Corp. He was elected as a Republican from Kentucky's First District in 1994. They were featured in a 2010 Washington Post story about dogs on Capitol Hill, including this photo in his office: 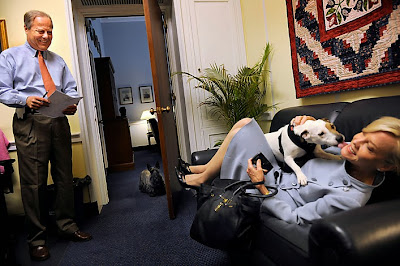