As election season nears, House Democrats are trying to unseat Republicans in areas where President Obama won the majority of the vote, while House Republicans are targeting Democrats in areas where Obama lost. Both sides have set their sights on beating incumbents of the opposing party, even if those politicians have more often than not voted in favor of the other party. 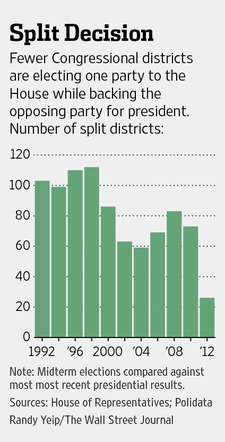 "As the ranks of centrist lawmakers in both parties have thinned, political operatives' efforts to oust them have intensified," Kristina Peterson reports for The Wall Street Journal. While once there were 60 to 70 middle-of-the-road Democrats in the House, only nine remain, with two of those retiring. As a result seven Democrats—Collin Peterson (Minn.), Nick Rahall (W.V.), John Barrow (Ga.), Patrick Murphy (Fla.), Pete Gallego (Texas) and two Arizona lawmakers—are the new targets of the GOP. At the same time Democrats are focusing their sights on 14 House Republicans in districts won by Obama in 2012. (WSJ graphic)

Even though Peterson, the ranking Democrat and former chairman of House Agriculture, considers himself a conservative and voted against federal health reform, the National Republican Campaign Committee spent $3.2 million in Minnesota on advertisements attacking Peterson and Rep. Rick Nolan, Peterson writes. Peterson said at a fundraiser, "The Republicans are going after me because there's nobody else to go after. I'm the bottom of the barrel." Peterson won his 2012 re-election with 60 percent of the vote, while Obama earned 44 percent of the vote.

But pro-Republican ads have continued to link Democratic candidates to Obama, even if those candidates rarely vote in favor of the president, Peterson writes. "It is a strategy aimed at tying conservative Democrats to a national party viewed with suspicion at home."  David Wasserman, a House expert at the nonpartisan Cook Political Report, told her, "It is simpler for voters to connect the dots between a congressman and a president of the same party than to understand nuances those members are trying to convey."

Democrats are "employing a similar strategy against the 14 House Republicans they are targeting," Peterson writes. "A new paid online ad campaign from Democrats blasted House Republicans for stalling on immigration a year after the Senate passed bipartisan legislation." (Read more)
Written by Tim Mandell Posted at 7/07/2014 02:39:00 PM