Researchers at the University of Southern Maine found that based on data from the National Health Interview Survey from 2007 to 2010 almost 23 percent of rural residents purchased high-deductible health insurance plans, compared to 20 percent of urban residents, Abigail Gay reports for the Daily Yonder. "The more rural the county, the more likely residents were to purchase high-deductible plans, the study showed. More than a quarter of people living in rural counties that were not adjacent to a metro area had high-deductible plans."

"The study used data from before the full implementation of the Affordable Care Act," Gay writes. "The act’s requirements that many residents get private insurance could cause another spike in the purchase of high-deductible plans, the study said." Researchers found that federal health reform “has the potential to greatly expand health insurance coverage for many rural Americans. However, the impact on access to health care may depend, in part, on the benefit design of the plans into which rural residents enroll.”

The study found that rural residents had a harder time affording prescription drugs in 2013, Gay writes. Also, rural residents spent an average of 26 percent more on out-of-pocket expenses than their urban counterparts who had the same premium. Since 2007, high-deductible enrollments have risen 47 percent. In 2012, about 33 percent of people who had private medical insurance were enrolled in high-deductible plans. (Read more) (Maine Rural Health Research Center graphic) 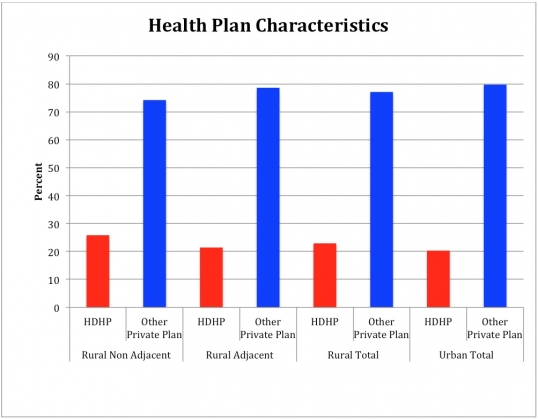