Some in South wary of plans to trim voting precincts

When a Republican member of the elections board in Cleveland County, North Carolina, explained the plan to consolidate five voting precincts into two, it sounded logical and helpful. He spoke of wheelchair access and $10,000 in savings every election. However, some African Americans are skeptical about the true reasons behind the change, Richard Fausset writes for The New York Times. (NYT graphic) 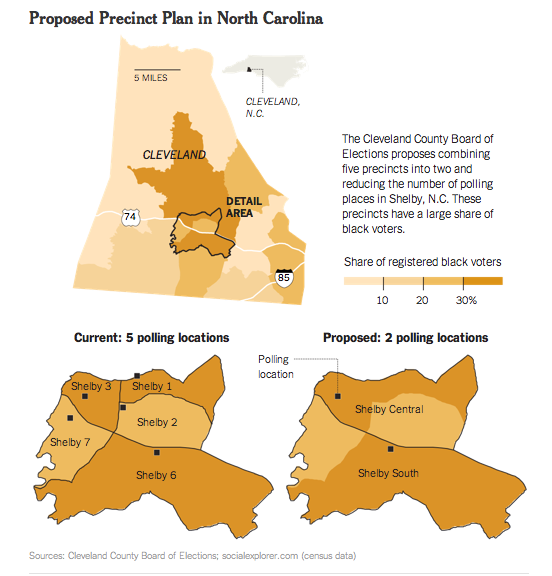 Those precincts have a lot of black voters who often vote Democratic. "We know that this is part of a bigger trend—a movement to suppress people's right to vote," said Rev. Dante Murphy, president of the Cleveland County branch of the NAACP.

The same issue has arisen in a number of communities, especially those in the South, "where changes to election laws no longer require advance approval from the federal government after a year-old Supreme Court ruling voided a key section of the Voting Rights Act," Fausset reports.

Voting-rights advocates say such changes and some new state laws that limit ballot access and require voters to show picture IDs add up to a deliberate effort to reduce voting by minorities, Fausset reports, while supporters of the changes say the new laws protect against voter fraud and can even be more cost-effective. Though in many places the obvious racism of the 1960s is mostly a thing of the past, "what often lingers is a racial mistrust that can make the moving of a polling place from a fellowship hall to a public park seem innocent to some, sinister to others," Fausset notes.

Francis X. De Luca, president of the Civitas Institute, a conservative North Carolina think tank, said, "This is something that local people can work out." However, voting-rights advocates and usually Democrats—whose success in states such as North Carolina depend on good black voter turnout—are less trusting. Others say local election changes are difficult to follow because they no longer need to get approval from the U.S. Justice Department.

The NAACP's Murphy said the reduction in polling places would cause longer lines, which might discourage some voters, and people might show up at the wrong location. Election-board member Alan Langley voiced surprise that anyone would think the proposal "was based on racial, or even partisan, motives," Fausset reports.
Written by Al Cross Posted at 7/08/2014 05:14:00 PM