Residents in drought-stricken California are turning against one another, using long-standing grudges as an excuse to try to get their neighbors in trouble. Despite severe drought, many residents have done little to conserve water, and some have continued using it excessively in spite of the consequences, Ian Lovett reports for The New York Times. "In five months since the drought emergency was declared, Californians have cut their water consumption only 5 percent compared with recent years, according to state officials—a far cry from the 20 percent that Gov. Jerry Brown called for in January."

As as result, residents are being asked "to tattle on their neighbors for wasting water—and the residents have responded in droves," Lovett writes. "Sacramento, for instance, has received more than 6,000 reports of water waste this year, up twentyfold from last year," and the city has issued more than 2,000 notices of violations. 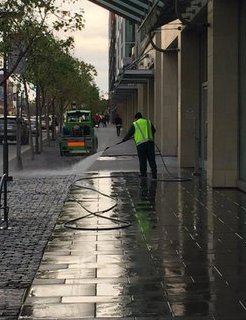 And when telling on neighbors doesn't work, "some drought-conscious Californians have turned not only to tattling but also to an age-old strategy to persuade friends and neighbors to cut back: shaming," Lovett writes. "On Twitter, radio shows and elsewhere, Californians are indulging in such sports as shower-shaming (trying to embarrass a neighbor or relative who takes a leisurely wash), car-wash-shaming and lawn-shaming." (This photo of a San Francisco city employee washing a sidewalk with a hose was posted on Twitter)


Officials in Los Angeles are going so far as to "offer residents door hangers, which they are encouraged to slip anonymously around the doorknobs of neighbors whose sprinklers are watering the sidewalk," Lovett writes. " The notices offer a prim reminder of the local water rules and the drought. The Irvine Ranch Water District, meanwhile, shows residents how their water consumption compares with that of other homes in the area—and puts labels on customers’ bills that range from 'low volume' to 'wasteful.'” (Read more)
Written by Tim Mandell Posted at 7/07/2014 02:37:00 PM