Companies can drill for coalfield gas in Va. without all landowners' OK; some still not getting royalties 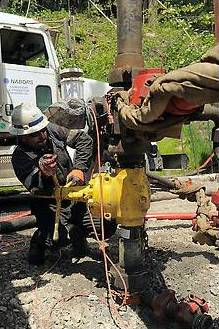 Companies working in Virginia are taking advantage of a state law passed in 1990 that only requires permission from state legislators to drill for natural gas in the state's coalfields, Cathy Dyson reports for of Fredericksburg's Free Lance-Star. "Called coal-bed methane, the gas used to be the scourge of miners—because it choked out the oxygen and caused suffocation. Coal companies ventilated the mines and let the gas escape into the air." (FLS photo by Suzanne Carr Rossi: Consol Energy site)

The law says that "If gas companies have leases on one-fourth of a drilling unit—usually 60 to 80 acres—they can get permission from the state Gas and Oil Board to drill on the majority of the parcels," Dyson writes. That leaves landowners, many of whom say they aren't seeing a dime in royalties, with no say in the matter.

A brochure from the Virginia Department of Mines, Minerals and Energy, the agency that regulates gas drilling in Virginia, says, "One owner cannot keep others from producing their gas or oil around a well by refusing to participate in the drilling unit,” Dyson writes. As a result, Texas-based Shore Exploration and Production Corp. has leased 84,000 acres in Caroline, Essex, King George, King and Queen, and Westmoreland counties near the Atlantic Ocean and Chesapeake Bay.

Mike Yates, commissioner of revenue in Dickenson County near the Kentucky border, told Dyson, “Gas companies were given a lot of rights with legislation that allowed forced pooling. In my opinion, what happened was the biggest taking of private property in the history of the commonwealth.” One Southwest Virginia landowner, who has spent 20 years fighting for royalties he has not received, says he is owed $250,000 for a claim that has netted the gas company $2 million. Consol Energy claims it pays the royalties, but it's up to the Gas and Oil Board to award them.

The issue was first explored in a Pulitzer Prize-wining series in the Bristol Herald Courier by Daniel Gilbert, now an energy reporter for The Wall Street Journal. Gas companies disagree that the law is hurting people. Greg Kozera, president of the Virginia Oil and Gas Association, told Dyson, “Virginia did a unique thing when it passed the law because it allowed development to proceed. If that hadn’t happened, we wouldn’t have had the jobs, we wouldn’t have had the industry.”

Gas drilling is a $2 billion-a-year industry in Virginia, which ranked 15th in the U.S. in gas production in 2012, Dyson writes. But the state isn't reaping the rewards, with 89 percent of natural gas drilled in Southwest Virginia coming from two Pennsylvania companies, CNX Gas and EQT Production Corp. (Read more)
Written by Tim Mandell Posted at 7/11/2014 11:29:00 AM