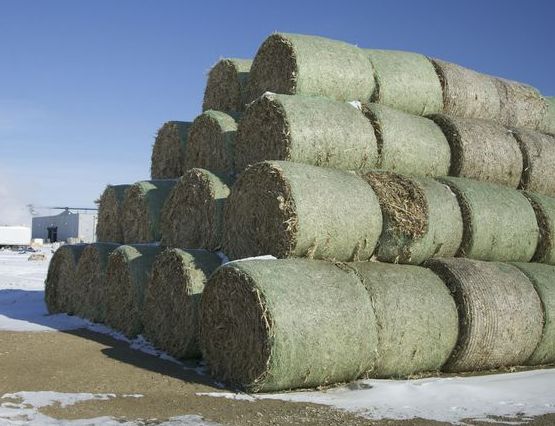 Production of commercial-scale cellulosic ethanol, which is considered more environmentally friendly than conventional ethanol, is up and running in northwest Iowa, Donnelle Eller reports for The Des Moines Register. Galva-based Quad County Corn Processors last week produced a limited amount but was expected to be at full speed this week and "plans to quickly scale-up so that it's producing about 2 million gallons of cellulosic ethanol a year." (Register photo by Charlie Litchfield: Bales of cellulosic field refuse outside a plant last winter)

Agri-Pulse, a Washington newsletter, reports that in 2007 a bipartisan Congress "overwhelmingly adopted an updated Renewable Fuel Standard that calls for 16 billion gallons of cellulosic ethanol to make up the largest of a 36-billion-gallon biofuel target by 2022. Underscoring that optimism was the decision by Congress to cap corn ethanol's annual contribution at 15 billion gallons in 2015 and beyond." (Agri-Pulse is subscription only, but a free trial is available by clicking here.)

"The dramatic reduction of carbon emissions offered by fuel from corn stalks or agriculture residues when compared to gasoline and the availability as an almost limitless source of feedstock led Congress to establish an upward progression of cellulosic ethanol targets under RFS," Agri-Pulse writes. But the Environmental Protection Agency kept revising its cellulosic ethanol targets, lowering numbers from an original target of 1.75 billion in 2014 to only 17 million gallons. Blenders have still called the target number excessive, and EPA data shows that as of early June, less than 30,000 gallons of cellulosic ethanol has been produced this year.

But production could increase at a rapid rate, with two more facilities expected to be up and running in Iowa by the end of the year, Eller writes. DuPont Danisco is building a $225 million cellulosic ethanol plant near the town of Nevada, Iowa, that "plans to make 30 million gallons of ethanol annually from corncobs, husks and stalks, known as stover." Poet-DSM is building a $250 million cellulosic plant in the northwest Iowa town of Emmetsburg and plans to produce 25 million gallons of cellulosic ethanol annually. (Read more)
Written by Tim Mandell Posted at 7/10/2014 04:35:00 PM