Rural schools increasing in population; Hispanic students up 32.5 percent from 2008 to 2012

Rural student populations are on the rise. More than 10.5 million students were enrolled in rural schools in 2012, an increase of 9.1 percent from 2008, when the number was about 9.6 million students, Daniel Showalter reports for the Daily Yonder. During that same time enrollment decreased in suburban areas by 7.8 percent and by 1.4 percent in urban areas. (The interactive Yonder map shows changes in rural student populations. To see results by county click here) 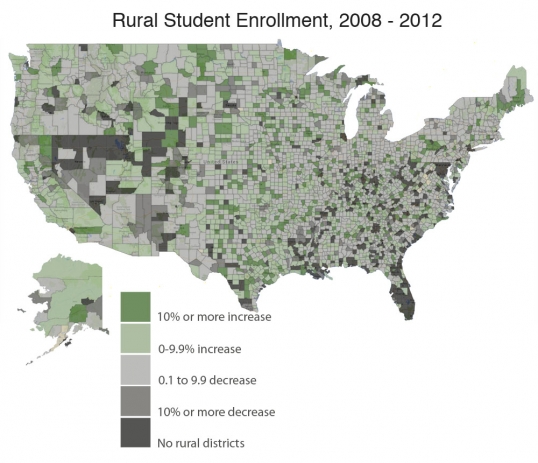 The number of non-white students increased significantly in rural areas from 2008 to 2012, rising by 23.9 percent, while the number of rural white students increased by 4.7 percent, Showalter writes. Hispanic enrollment increased by 32.5 percent, Asian by 22.7 percent and African American by 1.5 percent. All data was taken from the National Center for Education Statistics, which labels rural differently from how the Yonder labels it. (Read more)
Written by Tim Mandell Posted at 7/09/2014 03:23:00 PM