Bird flu expected to cause death of 5.3 million chickens in Iowa; epidemic also in Minn. and Wis. 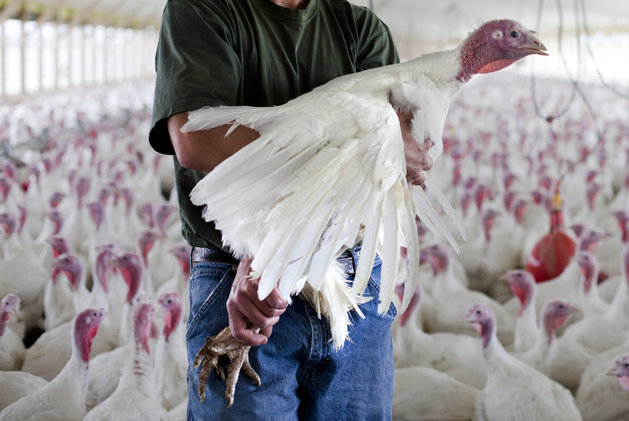 The biggest bird flu epidemic to hit the U.S. will necessitate that 5.3 million chickens in Iowa be euthanized, says the U.S. Department of Agriculture, Mike Hughlett reports for the Star Tribune. The Osceolo County farm represents about 9 percent of the state's hen population. Iowa has about 30 large egg operations with 58 million hens. (Associated Press photo by Matt Rourke)

Also on Monday, USDA said "that two more Minnesota farms, with a total of 31,000 birds, have been stung by the bird flu," Hughlett writes. "The two outbreaks were the sixth and seventh in Kandiyohi, Minnesota’s biggest turkey-producing county."

"Of the 28 Minnesota farms stricken by the flu, 18 have been suppliers to Hormel’s Jennie-O turkey division," Hughlett writes. "Some of those are run by contract farmers or independent farmers; others are directly owned by Hormel. Also, a Hormel-owned farm in western Wisconsin with 126,700 turkeys was hit by bird flu last week." That prompted Wisconsin Gov. Scott Walker on Monday to declare a state of emergency, "authorizing the Wisconsin National Guard to assist authorities responding to the bird flu in Jefferson, Juneau and Barron counties."

Hormel CEO Jeffrey Ettinger said in a statement: “We are experiencing significant challenges in our turkey supply chain due to the recent [highly pathogenic avian flu] outbreaks in Minnesota and Wisconsin. While Jennie-O Turkey Store has delivered strong financial performance so far in the first half (of Hormel’s fiscal year), tight meat supplies and operational challenges will pressure earnings in the back half of our fiscal year."

Bird flu is not considered a food safety hazard, Hughlett writes. It poses a low risk to humans, and there have been no reports of workers becoming sick from working with infected birds.
Written by Tim Mandell Posted at 4/21/2015 04:22:00 PM