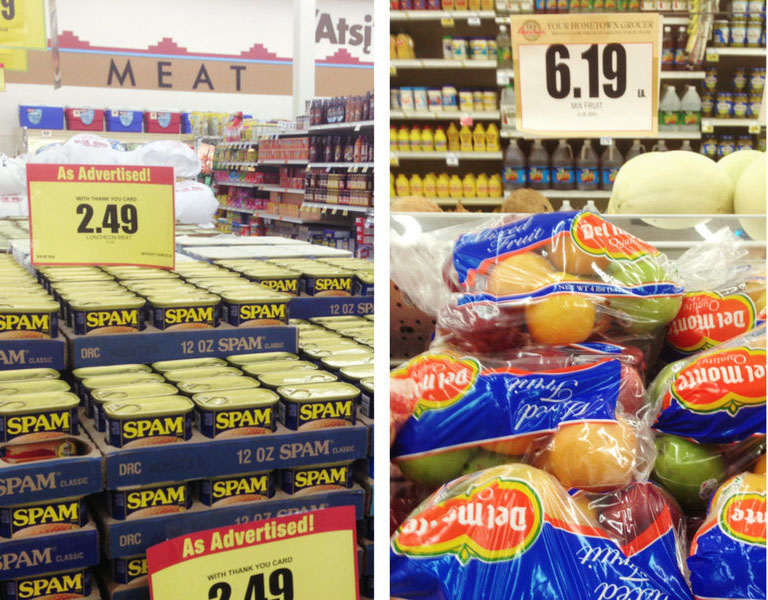 The Navajo Nation has added a 2-cent sales tax to an existing 5-cent sales tax on junk food and sodas in an attempt to promote healthier eating among the 250,000 tribe members in Utah, Arizona and New Mexico, Eliza Barclay reports for NPR. It's the first tax in the U.S. "to tax both sugary beverages and snacks, sweets and baked and fried goods of 'minimal-to-no nutritional value.'" (Diné Community Advocacy Alliance photo by Denisa Livingston: Food price comparison in a Navajo grocery store)

While less healthy foods are more expensive, the Navajo Nation in October 2014 declared all fruits and vegetables tax free, Barclay writes. The move is in response to an obesity and diabetes epidemic across the Navajo Nation. Obesity rates within the reservation range from 23 to 60 percent, while 10 percent of residents have diabetes and another 30 percent are pre-diabetic.

The U.S. Department of Agriculture has recognized the Navajo Nation as a food desert, with as high as 90 percent of grocery store products labeled unhealthy, Barclay writes. There are only 10 full-service grocery stores on the entire 27,000-square mile reservation. More than 50 percent of resident said in a 2012 survey that they travel off reservation to buy groceries, with some saying they travel as far as 240 miles for meat and vegetables.

Even if residents are willing to shell out higher prices to buy unhealthy foods, advocates said they hope the extra money goes back into the community to promote education and investments in healthier school lunches, Barclay writes.
Written by Tim Mandell Posted at 4/20/2015 01:56:00 PM