The Oklahoma Geological Survey, the state agency in charge of determining the cause of Oklahoma's rise in earthquakes, announced on Tuesday "that it is 'very likely' that the shaking has been caused by oil and gas activity," Mike Soraghan reports for EnergyWire.

The statement, which contradicts earlier statements by OGS scientists, said, "The OGS considers it very likely that the majority of recent earthquakes, particularly those in central and north-central Oklahoma are triggered by the injection of produced water in disposal wells," Soraghan writes. "In response, the Oklahoma Independent Petroleum Association conceded a 'possible relationship' between earthquakes and the industry."

Oklahoma had 585 earthquakes of magnitude 3 or greater last year and is on pace to have more than 800 this year, Soraghan writes. The state, which only averaged one to three earthquakes per year before 2009—when the oil and gas boom took off—is now averaging 2.5 earthquakes each day. (The Nation graphic) 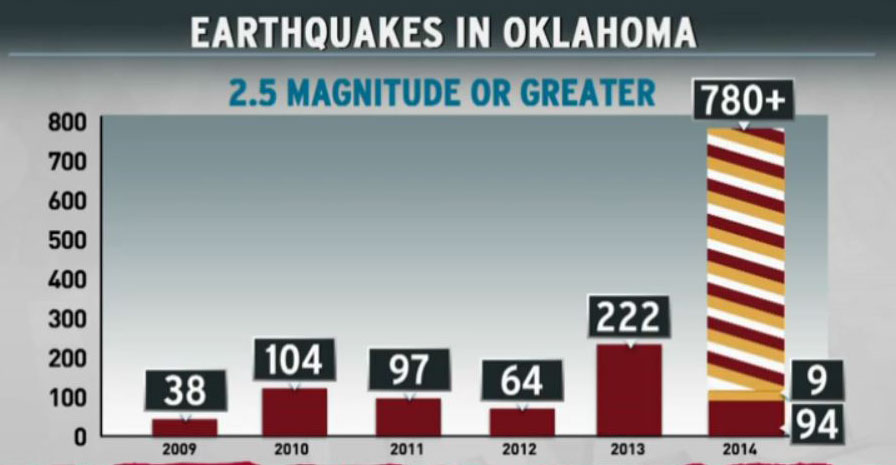 The Oklahoma Corporation Commission, the agency in charge of regulating oil and gas in the state, said it is considering all options and considers resolving the issue a priority, Soraghan writes. But officials "have said some aspects of the situation are beyond their control and in the hands of the state Legislature."

"Legislators, though, have not acted," Soraghan writes. "No legislation related to man-made earthquakes or disposal wells was introduced this year, though it has moved to protect industry from municipal ordinances." Republican Gov. Mary Fallin has said she believed most of the earthquakes are natural. (Read more)
Written by Tim Mandell Posted at 4/22/2015 02:14:00 PM