"For the first time, the U.S. Geological Survey has unveiled a map of earthquakes thought to be triggered by human activity in the eastern and central U.S.," Rong-Gong Lin II, Jon Schleuss and Thomas Suh Lauder report for the Los Angeles Times.

Seismic activity has increased dramatically in recent years in Oklahoma, in Texas near Dallas-Fort Worth, Kansas, Colorado, New Mexico and Ohio, all in areas with deep injection wells from increased oil and gas activity or other industrial activities, the Times writes.

Earlier this week The Oklahoma Geological Survey, the state agency in charge of determining the cause of Oklahoma's rise in earthquakes, said it is "very likely" that the shaking has been caused by oil and gas activity. Oklahoma had 585 earthquakes of magnitude 3 or greater last year and is on pace to have more than 800 this year.

Mark Petersen, chief of the USGS' National Seismic Hazard Project, "said the pattern of increased quakes is troubling," reports the Times. He said, “These earthquakes are occurring at a higher rate than ever before and pose a much greater risk and threat to people living nearby." (USGS map) 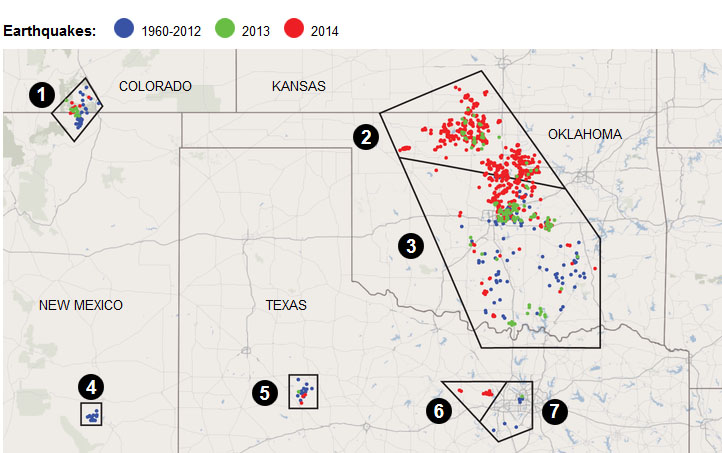