Loss of coal jobs and population in E. Kentucky has drawn attention of federal reserve bank 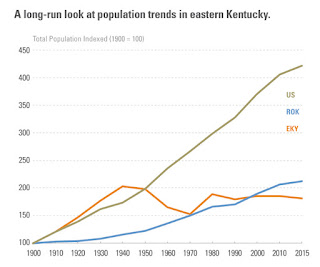 The continued loss of coal jobs and population in Eastern Kentucky has drawn the interest of the Federal Reserve Bank of Cleveland, whose head will be in Hazard, Ky. on Sept. 1. The region, which saw a 21.6 percent decline in coal jobs during the first three months of 2016, lost another 6.1 percent of coal jobs from April to June, according to a report from the Kentucky Energy and Environment Cabinet, Bill Estep reports for the Lexington Herald-Leader. (Federal Reserve Bank of Cleveland graphic)

The report states that "from 1995 to 2011, total net migration between Eastern Kentucky and different states was positive as more people moved to Eastern Kentucky than away from it: a net gain of around 1,300 people per year. However, from 2011 to 2014, a period that coincides with the recent decline of the coal industry, net migration became negative to the tune of -1,100 people per year." (Federal Reserve Bank of Cleveland graphic) 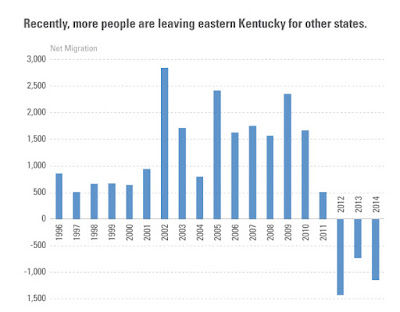 The majority of migration was to other counties in Kentucky or to neighboring states, with the biggest loss in state to Fayette County, home to urban Lexington, the report states. Fayette County has one of the state's lowest unemployment rates.

The state report estimates employment in the coal industry was 6,465 as of July 1, Estep writes. "That means the state has the fewest miners since 1898, before the extension of railroads opened the way for explosive growth in production and jobs in Eastern Kentucky in the early 1900s." In the second quarter of 2011, Eastern Kentucky employed 13,695 in the coal industry. The average for the same period this year was 3,764.
Written by Tim Mandell Posted at 8/02/2016 10:00:00 AM