Sharing syringes isn't like sharing a bottle or a joint: it could lead to HIV or hepatitis outbreaks

Amanda Holpuch of The Guardian took a trip to Wolfe County, Kentucky, perhaps the U.S. county most vulnerable to an outbreak of HIV or hepatitis C from needle sharing by intravenous drug users, a report noted here June 16.

"A man was lying sedate after injecting drugs. His fellow users, to amuse themselves, threw needles at him like a human dartboard to see if they would stick, according to a recent police report in Wolfe County," Holpuch reports, quoting special deputy sheriff Gary Smith: “Back in the day, all we had to worry about was people drinking or smoking weed.” An unnamed captain says, “Everybody is using drugs here – end of story.”

The Centers for Disease Control and Prevention, in determining the 220 counties most vulnerable, used "a sobering recipe: high rates of drug overdose deaths and prescription opioid sales, a high white population, astounding rates of hepatitis C and searing poverty," Holpuch writes. "The CDC said the top 20 most vulnerable counties identified in its report are effectively equal in vulnerability because of the analysis’s margin of error, but Wolfe County is ranked first and serves as a model for the places at most risk, 13 of which are in Kentucky."

Smith likened the sharing of syringes "to a more dangerous version of a group of men getting together to share a bottle of whiskey. Instead of swapping saliva on a bottle cap, users are exchanging all types of body fluids and pushing a needle coated with those fluids into their bodies."

Kentucky was the first state in the South to authorize syringe-exchange programs, in 2015, but local officials have yet to establish one in Wolfe County or in many of the other 54 Kentucky counties on the national list of 220, the Lexington Herald-Leader reported in July. Here is The Guardian's version of the national map: 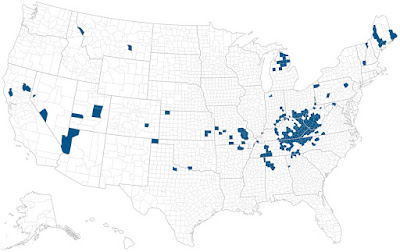