Retired journalist calls 'Hillbilly Elegy: A Memoir of a Family and Culture in Crisis' an absurd book 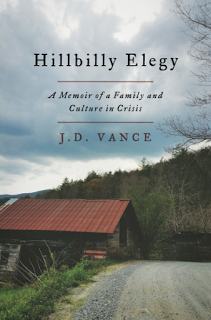 James Branscome, who covered the Tennessee Valley Authority and strip mining for The Mountain Eagle of Whitesburg, Ky., in the 1970s before becoming managing director of equity research for Standard and Poor's, has written a review of J.D. Vance's popular memoir Hillbilly Elegy: A Memoir of a Family and Culture in Crisis. Vance has said the white working class has lost its patriotism, which has led many in Appalachia to be drawn to Republican presidential nominee Donald Trump.

The book "is being especially celebrated by conservatives and libertarians because they believe it explains the phenomenon of the decline of the poor white working class in the U.S.," Branscome writes. "No book about Appalachia has gotten this much attention since Harry Caudill’s Night Comes to the Cumberlands was published in 1963 and led President Kennedy to lay the groundwork for LBJ’s eventual War on Poverty. Caudill eloquently described the rape of a region and a people by colonialist coal barons allied with governments and called on the conscience of the nation for remedies. Vance begs to differ: 'These problems were not created by government or corporations or anyone else. We created them, and only we can fix them….we hillbillies must wake the hell up.'"

"The solution Vance suggests is for people to just get the hell out of the region and the mountaineer ghettos of the North," Branscome writes. "They are loath to do that because 'Our men suffer from a peculiar crisis of masculinity in which some of the very traits that our culture inculcates make it difficult to succeed in a changing world….It’s about a culture that increasingly encourages social decay instead of counteracting it….Too many young men (are) immune to hard work.'"

Branscome writes, "Vance and those who love his book are asking an important question of why the white working class is angry and voting for Trump. To those of us who are concerned with the Appalachian region, it is something of a mystery of how in a few generations folks went from venerating FDR and JFK to voting for the likes of Trump. Maybe they aren’t voting for him; maybe they are just voting against all the failed programs that Harry Caudill said were not a fix to the problems he described. In many ways it’s still night in the Cumberlands."

"But all over the region that Vance doesn’t know very well, there are people shining lights brighter than his on good solutions," Branscome writes. "In an awkward stab at humility in the introduction, noting he’s very young and has accomplished little besides getting through Yale Law School, Vance says, 'I find the existence of the book you hold in your hands somewhat absurd.' I agree."
Written by Tim Mandell Posted at 8/03/2016 09:05:00 AM

I would like to recommend reading Hillbilly Elegy: A Memoir of a Family and Culture in Crisis.
I just finished reading it today, and my conclusion is that its a very good book to read.

I brought mine from Amazon and I got it in only two days.
Here's a link for the book on Amazon:
http://amzn.to/2b3POQs