Trump says coal mine owners struggling to survive, industry has too many safety inspections 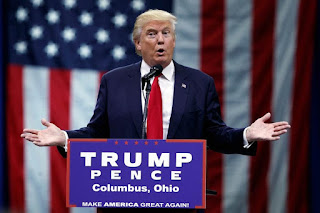 At a rally Monday in Harrisburg, Pa., Republican presidential nominee Donald Trump suggested that coal mine owners are struggling to survive and safety inspections are burdensome, Timothy Cama reports for The Hill. He also said solar power is too expensive, unsightly and dangerous to birds. "Democratic presidential nominee Hillary Clinton has set a goal to expand the country’s solar power capacity sevenfold and generate enough renewable electricity in the United States to power every home by 2027." (Associated Press: Trump in Harrisburg)

Trump said, “I have friends that own the mines. I mean, they can’t live. The restrictions environmentally are so unbelievable where inspectors come two and three times a day, and they can’t afford it any longer and they’re closing all the mines. … It’s not going to happen anymore, folks. We’re going to use our heads.”

Ken Ward, of the Charleston Gazette-Mail, writes, "It’s not really clear what environmental inspections Trump is talking about that involve inspectors visiting mines two or three times a day. Complete safety inspections of underground coal mines are required once per quarter—and sometimes those inspections take so long that MSHA has people at larger underground operations every day. But surely Mr. Trump, a champion of coal miners, isn’t thinking about cutting back on safety inspections."
Written by Tim Mandell Posted at 8/03/2016 09:15:00 AM