Backyard beekeepers putting their colonies, and nearby ones, at risk by not controlling mites 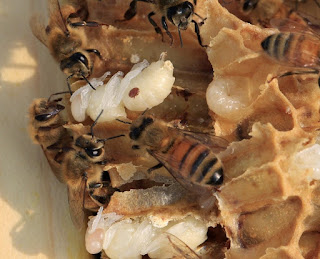 Novice beekeepers may be inadvertently putting their hives, and those located nearby, "in danger because they aren't keeping the bee mite population in check," Dan Gunderson reports for Minnesota Public Radio News. "Many hobbyists avoid mite treatments, preferring a natural approach, but that's often a deadly decision for the bees, said University of Minnesota bee expert Marla Spivak." (MPR News photo by Judy Griesedieck: A varroa mite, seen here infesting the pupae of a developing bee."

Spivak said surveys have shown that backyard beekeepers are taking the greatest losses nationwide, with most of the losses the result of varroa mite, Gunderson writes. Spivak said "untreated hives can spread mites and viruses to other hives within several miles. Healthy bees will invade a dying hive to steal the honey. When they do, they also carry mites with them back to their hives." Spivak told Gunderson, "The combination of the mite and the viruses is deadly."
Written by Tim Mandell Posted at 8/05/2016 09:45:00 AM