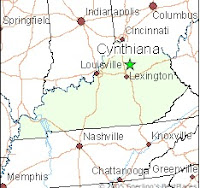 A rural town in Kentucky will be overrun by zombies this weekend. Cynthiana, (Best Places map) hometown of The Walking Dead graphic novel and television show creator Robert Kirkman and original artist Tony Moore, is hosting The Walking Dead Day on Saturday, with some projections saying the town of 6,354 will be overrun by as many as 30,000 visitors for the event, which will be attended by Kirkman, Moore and a horde of "walkers," as they are called in the graphic novel and on the show. A mural featuring television cast members—the event highlights the graphic novel, not the show—has been drawing the curious for the past several weeks.

Some Cynthiana residents hope the event will help revitalize the local economy, Shauna Steigerwald reports for the Cincinnati Enquirer. While there are plenty of thriving businesses, the town also has some empty storefronts downtown. Tomi Jean Clifford, executive director of the Cynthiana-Harrison County Chamber of Commerce and co-creator of Saturday's event, told Steigerwald, "We were looking for a way to put Cynthiana on the map. I feel like that's how Cynthiana is going to grow. We have to bring outsiders in."

Despite moving to Los Angeles and having a net worth of $20 million, Kirkman hasn't forgot his hometown. He still visits often, and in 2014 he and wife Sonia helped the local movie theater stay in business by paying for it to upgrade to a digital projector, Steigerwald writes. Sonia also has plans to open in December a five-room bed and breakfast with a restaurant. Kirkman, who said The Walking Dead centers around "blue-collar, small-town people ... the kind of people that I interacted with in Cynthiana" told Steigerwald, "It’s really exciting right now because I think there’s a really big shift, with new people coming into the town and new businesses coming in."
Written by Tim Mandell Posted at 8/05/2016 09:30:00 AM