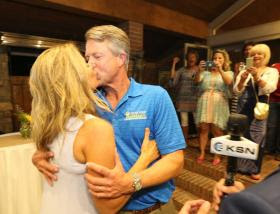 Kansas Rep. Tim Huelskamp, a Tea Party Republican who has been in office since 2011, lost his primary race this week to Roger Marshall, who was backed by the Kansas Farm Bureau, Justin Wingerter reports for The Topeka Capital-Journal. It was the first time in 70 years that a congressman representing the state’s 1st District was defeated in the primary. The race wasn't even that close, with Marshall earning 58,808 votes to 45,315 for Huelskamp, a margin of 56 percent to 44 percent. (Associated Press photo: Roger Marshall celebrates his primary victory with wife Laina)

The Kansas Farm Bureau's backing, which came one month ago, was also unprecedented, with the organization making the rare move to choose a Republican challenger over an incumbent, Wingerter writes. "Marshall coupled the endorsement with that of the Kansas Livestock Association and other agriculture groups to depict himself as the candidate of farmers and ranchers."

"Huelskamp has been a tea party favorite inside and outside of Washington," Wingerter writes. "His opposition to virtually all appropriation bills—including those that funded agriculture programs and kept the government open—made him susceptible to being labeled an obstructionist." But Marshall portrayed him as Washington man, even calling him "Washing-Tim" and "alleged he had grown too cozy with special interests in the capital while ignoring Kansas constituents."

Politically, Huelskamp and Marshall agree on major issues, Wingerter writes. The difference came down to personality and backers. "The balanced-budget-focused ESA Fund bought large chunks of advertising time for its 'Washing-Tim' ads. Club for Growth accused Marshall of fiscal recklessness in ads. The U.S. Chamber of Commerce, in a rare move, targeted the incumbent with a six-figure advertising purchase during the final weeks. The Kansas Chamber of Commerce, on the other hand, sided with Huelskamp."

The Kansas Farm Bureau is not alone in political endorsements. Some state Farm Bureaus endorse and contribute to the political field while others do not.
Written by Tim Mandell Posted at 8/04/2016 09:30:00 AM