The Office of Surface Mining Reclamation and Enforcement (OSMRE) announced on Wednesday that it will fund a $1 million study to examine links between surface coal mines in Central Appalachia and increased health risks of residents living near those mines. The study will be conducted over a two-year period by the National Academy of Sciences (NAS).

Researchers like Dr. Michael Hendryx, professor at Indiana University's School of Public Health, have been studying a link between mountaintop removal coal mining and Appalachian health for years. Hendryx's research has sparked debate in the past. 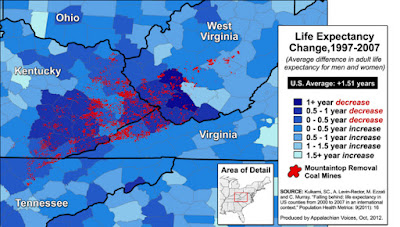 The report found that areas with mountaintop removal have lower life expectancy rates and "significantly higher mortality rates from heart disease than other parts of Appalachia with similar levels of poor health, smoking and poverty." The report also states that "more than 700 additional deaths from heart disease occur annually in areas with mountaintop removal compared to areas of Appalachia without mining."
Written by Tim Mandell Posted at 8/04/2016 11:30:00 AM