Pharmaceutical sales representatives from health-care giant Abbott Laboratories sales reps "were instructed to downplay the threat of addiction with OxyContin and make other claims to doctors that had no scientific basis," David Armstrong reports for Stat, the health-and-medicine supplement to The Boston Globe, after reading internal documents in a lawsuit that were unsealed by a judge.

The documents revealed that offering sugary sweets was the secret to getting one surgeon to listen to sales pitches for OxyContin, and to buy the painkiller, according to internal documents obtained by  Using a tip from nurses that the surgeon liked junk food, the sales rep "showed up with a sheet cake box filled with doughnuts and snack cakes arranged to spell out the word 'OxyContin'," Armstrong reports. (Stat photo illustration) 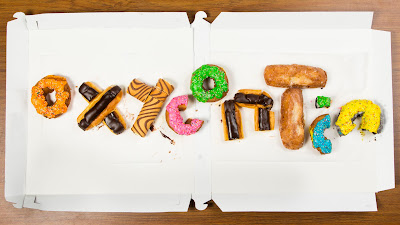 "The doughnut ploy . . . shows the lengths to which Abbott went to hook in doctors and make OxyContin a billion-dollar blockbuster," Armstrong writes. "The sales force bought takeout dinners for doctors and met them at bookstores to pay for their purchases. In memos, the sales team referred to the marketing of the drug as a 'crusade,' and their boss called himself the 'King of Pain'.”

What Armstrong calls "a treasure trove of internal documents" became available a few months ago, when a Kentucky judge ordered their release in response to a motion by Stat, reported Kentucky Health News, published by the Institute for Rural Journalism and Community Issues, which also publishes The Rural Blog: "Documents were part of a state attorney general's lawsuit settled in December by payment of $24 million from Purdue Pharma, the maker of OxyContin."

Armstrong writes, "Abbott, a much larger company than Purdue, had a sales force entrenched in hospitals and surgical centers, and had existing relationships with anesthesiologists, emergency room doctors, surgeons, and pain management teams. Abbott devoted at least 300 sales reps to OxyContin sales—about the same number of people Purdue initially dedicated to the drug—as part of a co-promotional agreement with Purdue."

Abbott marketed OxyContin from 1996 through 2002 after it was approved by the U.S. Food and Drug Administration, Armstrong writes. "With Abbott’s help, sales of OxyContin went from a mere $49 million in its first full year on the market to $1.6 billion in 2002. Over the life of the partnership, Purdue paid Abbott nearly a half-billion dollars, according to court records." (Read more)
Written by Tim Mandell Posted at 10/07/2016 12:31:00 PM