Cattle raisers are getting less money at the stockyard, but consumers are not reaping the rewards at the grocery store, Jere Downs reports for The Courier-Journal in Louisville. Farmers in Kentucky who a few years ago got $1,600 for an 800-pound calf are now getting $800 to $900. In South Dakota, calves bought for $1,200 to $1,500 to replace losses from the devastating 2013 blizzard have sold for $600 to $750, Jeff Holland reports for the Rapid City Journal. Another brutal South Dakota winter this year is raising costs to raise a calf by $200. 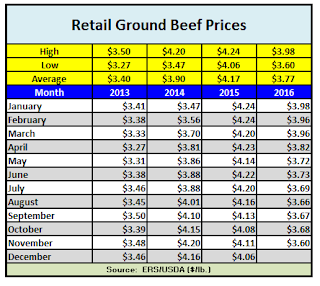 Silvia Christen, executive director of the South Dakota Stockgrowers Association, "said a number of factors have led to the severe downturn," Holland writes. "The 2015 repeal of country-of-origin labeling for beef and pork products meant U.S. retailers could seek cheaper imports of beef products. Christen said her organization was also concerned with beef buyers' consolidating, leading to a reduction in the number of packers and a less competitive market."

In Kentucky, the top Eastern cattle state, beef once generated $1 billion in annual sales, but cattle farmers now "are barely breaking even or losing money for the 1 million young cows, steer or calves sold each year to fatten in feedlots out west," Downs writes. "While cattle farmers lose about half of their income, supermarket beef prices have barely budged, edging downward about 10 percent, according to Cattle Fax, a beef industry analyst firm." Beef cost an average $5.74 in 2016, down from $6 per pound in 2015, according to the U.S. Department of Agriculture.

"Fairer cattle trading practices are the promise of new federal rules finalized in the waning days of the Obama administration at USDA," Downs writes. "But that reform of the federal Grain Inspection, Packers & Stockyards Administration has been put on hold for 60 days by President Trump. For a farmer who has received $1,000 per calf this year instead of $2,000 a few years ago, the new GIPSA rule that was to be final in February would enable him to file a federal complaint and wield other means to challenge anti-trust practices and unfair competition," said Paul Wolfe, senior policy analyst at the National Sustainable Agriculture Coalition, the Washington, D.C., lobby representing 100 grassroots groups working for a healthier agriculture economy.
Written by Tim Mandell Posted at 2/06/2017 01:24:00 PM