Consol Energy, formerly Consolidation Coal, is getting out of the coal business

Consol Energy Corp. is getting out of the coal business and focusing on oil and natural gas, Daniel Moore reports for the Pittsburgh Post-Gazette. The 150-year-old coal mining company, formerly Consolidation Coal, said last week that "it could sell or spin off its coal business—which includes a controlling stake in three sprawling underground mines in Greene County [Pa.] that sell coal to power plants—as early as this year."

The company announced Tuesday it was laying off 200 workers at its Bailey mine in Greene County—the state’s largest, with an annual production capacity of 11.5 million tons, Moore reports in a separate story. Company officials said they were forced to reduce the size of the workforce "after a recent state ruling restricted its underground mining operations beneath Kent Run, a stream that flows through Ryerson Station State Park in the western part of the county." (Consol map) 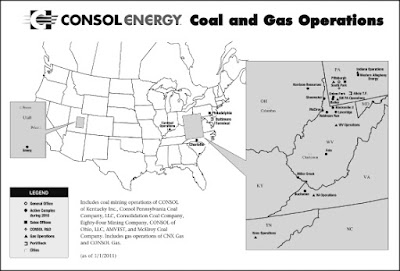 The company maintains "the expectation that natural gas prices would rise, and productivity gains and cost controls would drive growth," Moore writes. "The plan is another step in the company’s strategy to move away from coal. In 2015, Consol spun off coal assets in 2015 to form CNX Coal Resources, a master limited partnership that owns 25 percent stake and fully operates the Greene County mining complex. On Tuesday, the company said a third option for Consol’s coal business would be to simply let CNX Coal take over the parent company’s stake in the mining complex."
Written by Tim Mandell Posted at 2/10/2017 10:03:00 AM