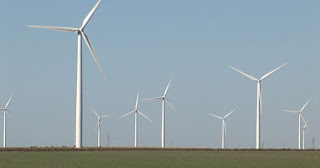 Renewable-energy advocates say wind and solar energy, not coal, can revive rural communities, Chris Martin reports for Bloomberg. Wind-farm developers employed more than 100,000 workers and the solar industry more than 200,000 at the end of 2016, compared to 65,971 coal mining jobs at the beginning of 2016, says U.S. Energy Department data.

"Leaders of the solar and wind industries say the rural areas that missed out on economic growth under President Obama are benefiting from the expansion of clean energy," Martin writes. "And that growth isn’t driving the collapse of coal mining, according to Abigail Hopper, the recently hired chief executive officer of the Solar Energy Industries Association." Hopper told Martin, “These are good paying, local jobs that the solar industry is creating everywhere.”

One problem is that the top 10 congressional districts for wind energy are all in Republican-dominated red states, Martin writes. Trump's victory, and his pledge to revive the coal industry, hasn't helped. "The Bloomberg Global Large Solar Energy index has dropped almost 13 percent since Trump was elected, compared with a 6.7 percent gain in the broader S&P 500 index."

"While Trump criticized wind turbines as bird killers during the campaign, his pick for Energy Secretary, former Texas Gov. Rick Perry, helped his state become the largest producer of wind power," Martin writes. "Wind developers expect to attract $60 billion in private investment under existing tax credits over the next few years as installations ramp up, and will double the power sent to the grid to about 10 percent, from about 5 percent today. That, and the built-in sunset provisions that came with the tax-credit extensions, may help preserve the policies as Trump and the Republican-controlled Congress consider changes to the tax system."
Written by Tim Mandell Posted at 2/06/2017 12:55:00 PM