Researchers at University of California, Davis have discovered a link between a syndrome seen in some newborn horses and childhood autism, Pat Balley reports for UC Davis. Neonatal maladjustment syndrome, or "dummy foal" syndrome, occurs in 3 to 5 percent of live horse births. It can cause newborns to seem detached, stumble around and show no interest in nursing.

The syndrome has for years "been attributed to hypoxia—insufficient oxygen during the birthing process," Balley writes. Typically, when a foal’s brain is deprived of oxygen, the resulting effects include mental deficits, abnormal behavior, blindness and even seizures. Oddly, however, most foals with neonatal maladjustment syndrome survive the ordeal and have no lingering health problems. This raised the question of whether hypoxia was the culprit in the syndrome." (UC Davis photo: Effects of the syndrome are reduced by using a harness to mimic the pressure normally experienced in the birth canal.) 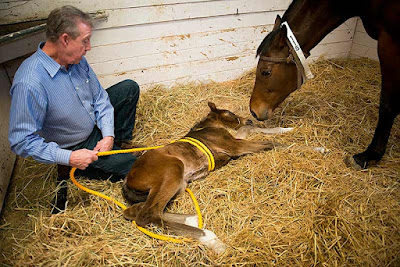 "Immediately after birth, the infant horse must make an equally important transition to consciousness," Balley writes. "In nature, a baby horse would be easy prey for many natural enemies, so the foal must be ready to run just a few hours after it is born. In short, somewhere between the time a foal enters the birth canal and the moment it emerges from the womb, a biochemical 'on switch' must be flicked that enables the foal to recognize the mare, nurse, and become mobile." Researchers say this theory is supported by the fact that the syndrome "appears more frequently in horses that were delivered via cesarean section or experienced unusually rapid births."

Researchers have found a similar disruption in the transition of fetal consciousness between horses and children, Balley writes. "With continuous treatment, including around-the-clock bottle or tube feeding plus intensive care in a veterinary clinic, 80 percent of the foals recover." Researchers note that "some children with autism do outgrow autistic behaviors by the time they reach their teen years," which suggests a possible parallel to the recovery of foals with maladjustment syndrome.

"Researchers are exploring whether abnormal regulation of neurosteroids during the time around childbirth could be one of many factors that might contribute to autism and related neurodevelopmental disorders," Balley writes. "A recent study has reported elevated levels of neurosteroids in children with autism spectrum disorder."
Written by Tim Mandell Posted at 2/07/2017 09:37:00 AM