Representatives from states with large rural populations—Montana, North Dakota, South Dakota and Wyoming—say President Trump’s promise to find $1 trillion for infrastructure by raising private money for roads and bridges won't do much to help rural areas, Ashley Halsey reports for The Washington Post. Sen. John Barrasso, a Wyoming Republican who chairs the Senate Committee on Environment and Public Works, said at a hearing Wednesday, “Funding solutions that involve public-private partnerships, as have been discussed by administration officials, may be innovative solutions for crumbling inner cities, but do not work for rural areas."

Halsey writes, "Trump has made infrastructure investment a focal point of his presidency, but the only substance to support his goals thus far has been a 10-page white paper that emerged in the final days of his campaign." The paper, written by Wilbur Ross, Trump’s nominee for commerce secretary, and Peter Navarro, head of the president’s National Trade Council, "says that by providing investors with an 82 percent tax credit, private money can be raised to pay for roads, bridges, transit and other critical infrastructure needs." (Post map: U.S. bridges) 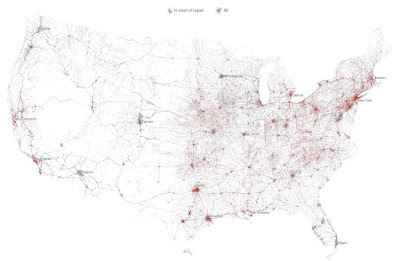 "The challenge to that approach is that private investors will want a return on their money beyond the tax credit, so only through tolling or other methods of raising money will their investments pay off," Halsey writes. "That makes high-volume urban areas attractive, while less-populated areas would be unlikely to see private cash." Montana, North Dakota, South Dakota and Wyoming are four of the least populated states.

William Panos, director of Wyoming’s Department of Transportation, told the Post, “Public-private partnerships and other approaches to infrastructure investment that depend on a positive revenue stream from a project are not a surface transportation infrastructure solution for rural states. The traffic volumes on projects in rural states are low, and it’s almost never feasible from revenue generation.”
Written by Tim Mandell Posted at 2/09/2017 11:20:00 AM