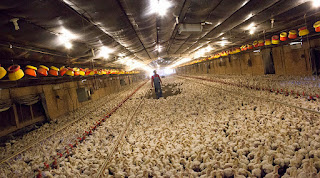 "Under the contract system, farmers provide the barns and labor to raise the chickens and the company provides chicks, feed and expertise to raise birds to slaughter weight," Pitt writes. In the lawsuit the farmers "say the companies colluded to fix farmer compensation at low levels to boost corporate profits, making it difficult for the farmers to survive financially." They contend that "the scheme keeps farmers in a state of indebted servitude 'living like modern-day sharecroppers on the ragged edge of bankruptcy.'"

The five farmers suing the companies all say they have since quit raising chickens and are tens of thousands of dollars in debt, Pitt writes. Only Tyson has responded publicly to the claims, with spokesman Gary Mickelson saying, "We want our contract farmers to succeed and don't consult competitors about how our farmers are paid. These are false claims."

The lawsuit, which claims the companies are like a "cartel," said they "frequently shared data on pay with each other to keep compensation lower than it would have been in a competitive market," Tom Polansek reports for Reuters. "That allowed the companies to keep more profits, the complaint said."

The lawsuit also said, "The companies also agreed not to compete for the services of farmers working for each in order to insulate themselves 'from normal competitive pressures that could potentially erode the effects of their information sharing agreement,'" Polansek writes.
Written by Tim Mandell Posted at 2/10/2017 09:37:00 AM