President Trump's pledge to repeal the Patient Protection and Affordable Care Act could have dire effects on drug-treatment programs, especially in Appalachia and other rural areas plagued by the opioid epidemic, Christine Vestal reports for Stateline. An estimated 1.6 million previously uninsured addicts in the 31 states that expanded Medicaid gained coverage since 2014.

More than 33,000 people died in 2015 from opioid overdoses, a 16 percent increase over 2014, while prescription overdose deaths have quadrupled since 1999, says a study by the Centers for Disease Control and Prevention. In 2014 Ohio had the most opioid overdoses and West Virginia the highest rate, says a separate study by CDC. Both expanded Medicaid.

ACA "offered states the ability for the first time to provide Medicaid coverage to adults without children, with the federal government paying most of the bill," Vestal writes. "That change, and the law’s mandate that all insurers cover addiction treatment at the same level as medical and surgical procedures, has allowed states to ensure that low-income people can get the care they need, said Linda Rosenberg, CEO of the National Council for Behavioral Health, which represents nonprofit addiction treatment organizations." (Stateline map: Six of the 10 states with the highest opioid death rates voted for President Trump) 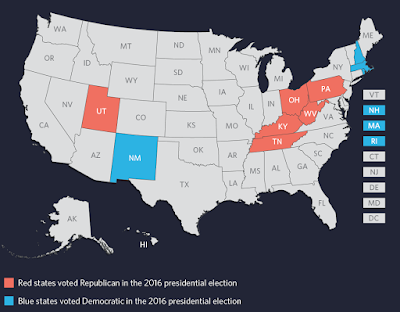 "Although a plan for replacing the federal health law has yet to be announced, House Republicans and Trump have proposed shifting Medicaid to a block grant, in which a capped amount of money would be allocated to each state to provide low-income health care services," Vestal writes. "By putting more of the cost burden on states, the shift is projected to save the federal government $1 trillion over 10 years. But most states would be unable to come up with the extra money and would have to scale back efforts to get more people into treatment, said Lisa Clemans-Cope, a researcher with the Urban Institute, which analyzes health care policy."

"Because addiction is a chronic, lifelong disease, a cut in Medicaid funding would stymy states’ efforts to reduce the number of people who are addicted to heroin and other opioids and at risk for drug overdoses," Vestal writes. "Not only would low-income adults already in treatment be in jeopardy of losing coverage for their continuing care, but budget-strapped states likely would be unable to help others get out of homeless shelters and jails and into treatment."
Written by Tim Mandell Posted at 2/06/2017 01:00:00 PM