Rural Wisconsin, which surprisingly went for Trump, anxiously waits for an economic revival

President Donald Trump narrowly won Wisconsin—where Barack Obama won in 2008 and 2012—largely on the strength of several rural counties that turned from blue to red in 2016, Claire Galofaro reports for The Associated Press. "They voted for Trump for an array of reasons, and the list of grievances they hope he now corrects is long and exacting: stagnant wages, the cost of health care, a hard-to-define feeling that things are not getting better, at least not for people like them." 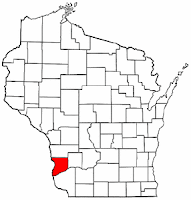 While Trump has talked of a U.S.-Mexico border wall and plans to ramp up immigration enforcement, those issues are of little concern in Crawford County (Wikipedia map), one of the oldest and poorest counties in Wisconsin, Galofaro writes. In Crawford, where Obama in 2012 beat Mitt Romney 52.8 to 46.1 percent, but in 2016 Trump easily beat Hillary Clinton 59.2 to 37.4, residents "are still watching and they are waiting, their hopes pinned on his promised economic renaissance."

"Jim Bowman, director of the county's Economic Development Corporation, says some of the economic anxiety here is based not on measurable decay, but rather a perception that life is decaying," Galofaro writes. "There are plenty of jobs, but it's hard to find one that pays more than $12 an hour. Ambitious young people move away. Rural schools are dwindling, and with them a sense of pride and purpose."

Mark Berns, who owns a small-engine repair shop that he can barely keep open, told Galofaro, "If you ask anybody here, we'll all tell you the same thing: We're tired of living like this. I just hope we get the jobs back and the economy on its feet, so everybody can get a decent job and make a decent living, and have that chance at the American dream that's gone away over the past eight or 10 years. I'm still optimistic. I hope I'm not wrong."

Like many others, Marlene Kramer, who voted twice for Obama, voted for Trump because of the hope that a change could be better, Galofaro writes. Kramer, 54, has worked for 40 years, all hard jobs, and now works at a sewing shop where the biggest benefit is getting to sit, instead of being on her feet all day. She said the Patient Protection and Affordable Care Act hasn't helped her, with her and her husband "stunned to find premiums over $1,000 a month. They opted to pay the penalty of $2,000 until Trump, she hopes, keeps his promise to replace the law with something better."
Written by Tim Mandell Posted at 2/08/2017 12:50:00 PM