McConnell on proposed elimination of Appalachian Regional Commission: 'Not going to happen'

President Trump's proposed budget may be dead on arrival in Congress, but its proposed cuts to programs that have helped the most vulnerable Americans have raised eyebrows because many of them people in rural areas he won by large margins. And the political pushback from Republicans is increasing. 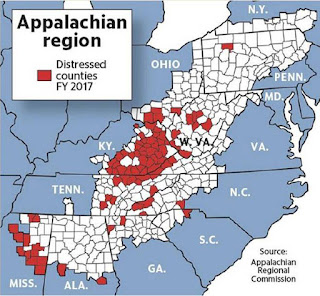 Senate Majority Leader Mitch McConnell, a Republican from Kentucky, says Trump's proposed elimination of the Appalachian Regional Commission is not only "not going to happen," the agency's budget will remain fully intact, reports WMYT-TV of Hazard. McConnell said in a speech Saturday in Corbin, "We are not going to allow any cuts to the Appalachian Regional Commission. It is very important to Eastern Kentucky. It has been for a number of years. That's not going to happen."

When the budget was announced last week McConnell's prepared statement didn't mention about the commission, a federal-state economic development agency that covers all of West Virginia and parts of Kentucky, Alabama, Georgia, Maryland, Mississippi, New York, North Carolina, Ohio, Pennsylvania, South Carolina, Tennessee and Virginia. ARC operates in 420 counties, most of which Trump won in November. The plurality of its economically distressed counties are in Eastern Kentucky. That area's congressman, former House Appropriations Committee Chair Hal Rogers, strongly objected hours after the budget plan was announced. McConnell will be with Trump today in Louisville, which is outside the Appalachian region.

Sabrina Tavernise and Trip Gabriel of The New York Times report on some other examples of Trump's budget seemingly disregarding part of his political base. Regina Feltner, a retired nurse with lung cancer who has received help from a heating subsidy through the Highland County Community Action Organization, a small nonprofit in rural southern Ohio, told the Times that without the subsidy, which she stands to lose under the proposed budget, she said she would probably have to move in with her daughter.

Another proposed cut "would kill the Legal Services Corp., which funds 133 civil legal-aid programs in the 50 states at a cost of $385 million," reports the Times. Also on the chopping block is the Community Development Block Grant program, which "works to ensure decent affordable housing, to provide services to the most vulnerable in our communities, and to create jobs through the expansion and retention of businesses," says the U.S. Department of Housing and Urban Development.
Written by Tim Mandell Posted at 3/20/2017 10:17:00 AM