One of the biggest tourist attractions in some rural areas this summer could be in the sky. The Nebraska Tourism Commission expects the Aug. 21 total solar eclipse to bring 4,000 to 10,000 visitors to key viewing locations in the state, David Hendee reports for the Omaha World-Herald. Tourism officials say Nebraska, where more than 200 communities lie in the path of the eclipse, is considered one of the nation's top viewing locations because of "a 74 percent probability of favorable viewing conditions, combined with big, open skies."

"Demand for hotel rooms, bed and breakfasts, and recreational vehicle and tent sites during the eclipse weekend is high in communities in and near the zone of totality, tourism officials say," Hendee writes. Hendee notes that with the eclipse on a Monday it creates even more tourism opportunities, including "the potential for a three-day weekend of travel, eclipse workshops and seminars and community celebrations. Universities from across the nation are sending scientists to set up observation stations. Amateur astronomers are planning star parties." (World-Herald graphic) 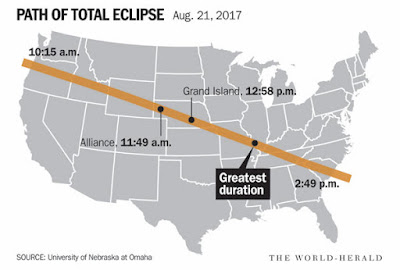 Kevin Howard, director of the Alliance Visitors Bureau, said the city of 8,500 in the Nebraska Panhandle, is expecting 10,000 visitors for its 2 minutes and 28 seconds of totality, Hendee writes. "Alliance hotels and RV parks have been booked since August. Plans are in the works to add 800 to 1,000 primitive camping sites. More portable toilets are on order. Restaurants and grocery stores are making plans to stock up. Banks plan to have extra cash on hand. Law enforcement agencies are coordinating how to handle the flow of traffic."

Other rural areas are expecting similar numbers, Hendee writes. Beatrice and nearby Homestead National Monument of America are expecting some of the state’s longest times of totality: 2 minutes and 35 seconds. Lisa Wiegand, Gage County tourism director, told Hendee, “I’ve heard that a lot of people from Omaha will drive in for the day. Tour buses are coming from Iowa. I know of people coming from Scotland. We had people from Kansas come up to buy eclipse glasses for guests they have coming from Japan. Our hotels are 100 percent sold out for Sunday night."
Written by Tim Mandell Posted at 3/23/2017 12:02:00 PM