President Trump's budget calls for a 13 percent cut—$2.4 billion—to the U.S. Department of Transportation, including eliminating subsidies of Amtrak's long-distance trains, which provide the only passenger service in 23 of 46 states in which it operates, touching many rural areas, Aric Jenkins reports for Fortune. The budget document said long-distance train service long has "been inefficient and incur the vast majority of Amtrak's operating losses."

The Associated Press reports that without funding, many of the routes would probably close, because they are not profitable enough. Wick Moorman, president and CEO of Amtrak, said in a statement: "These trains connect our major regions, provide vital transportation to residents in rural communities and generate connecting passengers and revenue for our Northeast Corridor and state-supported services."

About 4.6 million passengers rode long-distance routes in fiscal 2016, Glenn Evans reports for the Longview News-Journal in northeast Texas. Amtrak said "ridership on the Texas Eagle route—which connects Chicago with San Antonio via Longview—increased 23.2 percent to 110,970 passengers from October through early January, up from 90,099 passengers a year ago." The daily route stops at several rural towns in Illinois, Missouri, Arkansas and Texas, and three times per week continues to Los Angeles, stopping in rural areas in New Mexico, Arizona and California. (Amtrak map: Long distance routes are in orange) 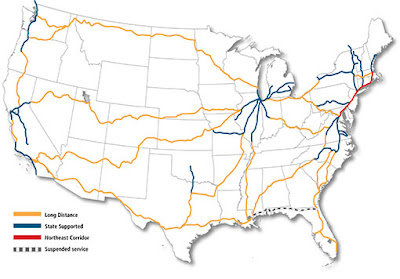 In Alabama, one of the 23 states that would lose service, the budget has forced officials in Anniston to put the breaks on a proposed trail rail extension that they hoped would increase tourism and revitalize the local economy, Eddie Burkhalter reports for The Anniston Star. "Trump’s budget outline would either reduce Anniston’s Amtrak service or end it altogether."

"Anniston’s $138,000 portion would extend the city’s Amtrak station platform by 400 feet and allow passengers to load and unload bicycles," Burkhalter writes. "City officials hope that doing so will attract visiting cyclists to the city’s biking opportunities, such as the Coldwater Mountain bike trails and the Chief Ladiga Trail. The city also plans to extend the Chief Ladiga to the train station downtown, and link the station by bicycle path to the trails atop Coldwater."