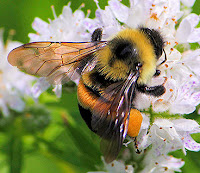 The U.S. Fish and Wildlife Service on Tuesday added the rusty patch bumblebee to the endangered species list, 60 days after President Trump ordered a 60-day freeze on new regulations on his first day in office, Corbin Hiar reports for Greenwire. Environmentalists had sued over the freeze for delaying protection for the species, which has lost nearly 90 percent of its population since the 1990s.

"Pesticides, habitat loss, climate change and disease spread from commercial honeybee colonies have put the species on the brink of extinction," Hiar writes. "The rusty patched bee lives in scattered populations in 12 states and one Canadian province, covering just 8 percent of its historical range."

The listing means the pollinator "is the first federally protected bee in the continental U.S.," Hiar writes. "The rusty patched bee's endangered status makes it a crime to knowingly harass or kill the insect, which as of 20 years ago could be found in 28 Eastern and Midwestern states and Washington, D.C."
Written by Tim Mandell Posted at 3/22/2017 09:43:00 AM