A Trump administration visa policy could lead to doctor shortages in rural areas that rely on foreign-born physicians, Miriam Jordan reports for The New York Times. About 25 percent of all physicians in the U.S. are foreign, but numbers typically are much higher in rural areas. The Educational Commission for Foreign Medical Graduates said there were 211,460 international medical graduates practicing in the U.S. in December 2015.

Concern centers around changes to H-1B visas, which are temporary visas given to skilled workers, including "foreign physicians who practice in places shunned by American doctors for personal and professional reasons," Jordan writes. "The H-1B program has raised questions about whether it displaces American workers, particularly in computer programming and engineering jobs, for which most of the visas are issued."

"U.S. Citizenship and Immigration Services recently announced that it would temporarily suspend a 'premium processing' option by which employers could pay an extra $1,225 to have H-1B applications approved in as little as two weeks, rather than several months," Jordan writes. "Companies using that option, the government said, have effectively delayed visas for others who did not pay the extra fee." A spokesperson said the measure was necessary to '“work down the existing backlogs due to the high volume of incoming petitions."

Changes could hurt rural areas, Jordan writes. For example, "in Coudersport, Pa., a town in a mountainous region an hour’s drive from the nearest Walmart, Cole Memorial Hospital counts on two Jordanian physicians to keep its obstetrics unit open and is actively recruiting foreign specialists. In Great Falls, Mont., 60 percent of the doctors who specialize in hospital care at Benefis Health System, which serves about 230,000 people in 15 counties, are foreign doctors on work visas."

Trump did well in rural areas, so The Washington Post did a diagram to show how his vote matched up with each state's reliance on physicians from other nations, and its Jeff Guo wrote a story. For a larger, clearer version of the diagram, click on the image below. 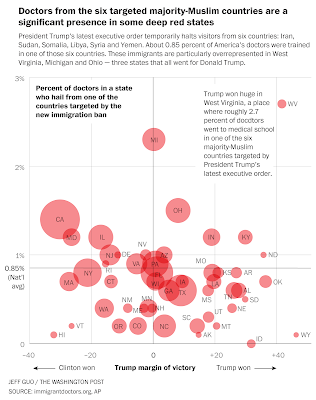