It's World Water Day, so we're looking at U.S. water policy and infrastructure

With today being World Water Day and this week, March 19-25, being Water Week 2017, Alison Burke, of the Brookings Institution, has put together a list of facts about water policy and infrastructure in the U.S.

Thirty "of the country’s largest water utilities support up to $52 billion in economic output and 289,000 jobs annually, and millions of households, businesses and industries depend on water systems every day," Burke writes. "The federal government actually plays a small role relative to states and localities, which are responsible for almost 96 percent of public spending on drinking water and wastewater facilities nationally each year."

One problem with investing in water is that the nearly 52,000 community water systems in the U.S. "frequently cross geographic and political boundaries and touch multiple watersheds and users," she writes. Another problem is modernizing facilities. "While more than 88 percent of Americans believe some type of action is needed to solve the country’s water infrastructure challenges, only about 17 percent of utilities are confident that they can just cover the cost of existing service through rates and fees—let alone pursue needed upgrades."

Another problem is that 64.2 percent of the nation's 90,000 dams are privately owned, compared to 20 percent by local government, 7.3 percent by state government and 3.7 percent by the federal government, Burke writes. Also, 62,700 of dams, or 69.3 percent, "were built before 1970, and 17.1 percent pose a potentially 'high hazard' to the economy, environment, and human life if they were to fail." (Brookings graphic: Dams built before 1970) 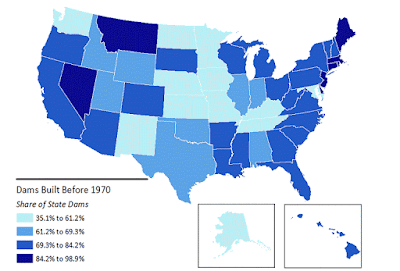