Entrepreneurs are more common in rural areas, and their businesses are likelier to survive

America's rural-urban disparities have familiar measures, most of them showing rural disadvantages: poverty rates, the strength of the job market, and people on disability. But surprisingly, perhaps, entrepreneurial start-ups are more common in rural areas despite an economic disadvantage, report five researchers writing in The Conversation, which calls itself "an independent source of news and views from the academic and research community."

Nearly 700,000 new businesses open each year in the United states that help to create "new market niches in the global economy," the researchers write. "Most people mistakenly believe these pioneering establishments occur in overwhelmingly in metropolitan areas, such as in the now-mythic start-up culture of Silicon Valley. Yet, according to the U.S. Census Bureau, it is in fact non-metropolitan counties that have higher rates of self-employed business proprietors than their metropolitan counterparts." (The Conversation graphic: rural and urban start-up business rates) 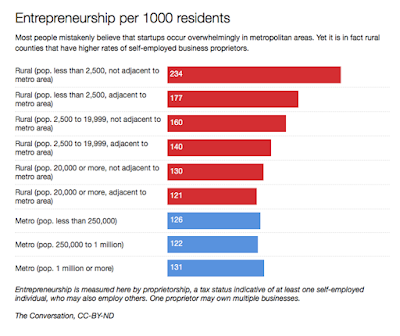 In fact, the more rural a county, the more entrepreneurial that county is. "The reality is that rural areas have to be entrepreneurial, as industries with concentrations of wage and salary jobs are necessarily scarce," the researchers write. Farming in rural areas is perhaps "the most entrepreneurial of occupations," but farmers represent less than one sixth of business owners in non-urban areas. 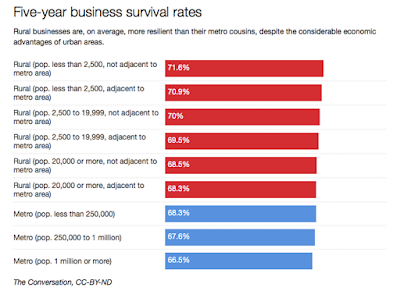 Rural start-ups have more resilience due to "cautious business practices in areas with few alternative employment options. This resilience is also remarkably persistent over time, consistently being at least on par with metro start-ups, and regularly having survival rates up to 10 percentage points higher than in metro areas over 1990-2007," the researchers write.

The report is part of a larger story that focuses on six rural-urban differences and illustrates them with graphics. The researchers are Brian Thiede, an assistant professor of rural sociology and demography at Penn State; Lillie Greiman, a research associate at the University of Montana; Stephan Welier, a professor of economics at Colorado State; Steven Beda, an instructor of history at the University of Oregon; and Tessa Conroy, an economic development specialist at the University of Wisconsin-Madison.
Written by Traci Thomas Posted at 3/21/2017 12:27:00 PM