Election Day brought sweeping victories to Democratic candidates across the country, even in rural areas and places that voted for President Trump in 2016. Some results may have been a referendum on Trump, as political scientist John Sides writes, but the party in the White House usually loses seats in midterm elections. Regardless of the reason, "It’s become clear that Democrats have the momentum across the country," Aaron Blake writes for The Washington Post. Here are some elections with rural resonance or special interest:

VIRGINIA: Democrat Ralph Northam was elected governor by 9 percentage points, which The Washington Post's James Hohmann says was a direct reflection of Trump's standing in the state: "Republican Ed Gillespie could not escape Trump’s unpopularity, despite his best efforts to thread the needle.” In exit polls, 34 percent of voters said the reason for their vote was to express opposition to Trump. This is especially telling in a race where pundits said Northam was having trouble connecting with rural voters. Voter turnout surged in the Northern Virginia suburbs and in rural Southwest Virginia, but the former has a lot more voters than the latter. (Post map) 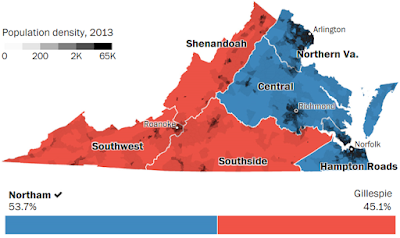 Steve Kornacki of MSNBC said Gillespie wanted to do “normal bad” for a Republican in Northern Virginia and make it up in rural areas. But his numbers in northern Virginia were more like Trump’s (very bad) and though he did better in the southwest than he did when he ran for the Senate, it wasn’t enough to make up the difference. “Revenge of the suburbs,” Kornacki called it.

Democrats erased a 32-seat GOP advantage in the House of Delegates, in what Michael Martz of the Richmond Times-Dispatch calls a "tsunami election," gaining an "epochal gain in power in a legislative chamber that has been under an iron Republican grip." Recounts are likely to determine which party ultimately controls the House. The surge of votes for Northam likely helped downticket races.

Two of those new delegates may be of interest to journalists. Former reporter Danica Roem became the first openly transgender person in the country to be elected to a state legislature, WRC-TV in Washington, D.C., reports. She beat out the 26-year incumbent, 73-year-old Republican Bob Marshall, who proposed a bill restricting which bathrooms transgender people could use. Roem worked for the Gainesville Times, the Prince William Times, and the Montgomery County Sentinel.

In the Blacksburg area, Republican Del. Joseph Yost lost to former television news anchor Chris Hurst, who was a reporter/anchor at Roanoke's WDBJ-TV in 2015 when his girlfriend, fellow reporter Alison Parker, was shot and killed during a live remote broadcast. The incident and Hurst's career gave him "unusually high name recognition," The Roanoke Times reports. "Touched by Hurst’s heartbreaking story and angry at Trump, Democrats from Virginia and other states donated big money to Hurst’s campaign hoping to flip the seat from red to blue," and he was boosted by student volunteers at Virginia Tech and Radford University. The race between Hurst and Yost is tricky to fit into a larger narrative, though; both are young centrists, and though the district is in a solid-red region, it was split almost evenly between Democrat and Republican voters in 2016, with Hillary Clinton getting a slight edge, the Post notes.

MAINE, America's most rural state, became the first to expand Medicaid by referendum. "As many as 80,000 residents of the state will gain coverage," Quinn Libson
reports for Route Fifty. Republican Gov. Paul LePage had declined to expand the program under a main provision of the Patient Protection and Affordable Care Act.

COLORADO: "Voters on Tuesday passed a controversial ballot issue that gives Broomfield more local oversight of oil and gas operations in the city, a move that probably will invite a legal challenge from Colorado’s large energy sector," John Aguilar reports for The Denver Post.

MONTANA: Liberian refugee Wilmot Collins will be the new mayor of the state capital of Helena, unseating Republican incumbent Jim Smith with just over 51 percent of the vote, Thomas Plank reports for the Helena Independent Record. Helena is one of the smallest capital cities in the country, with a population of around 31,000. Trump got 55 percent of the city's vote in 2016.

WASHINGTON: Democrat Manka Dhingra won a special election to a state Senate seat, which flipped the Senate to Democratic control. That means that Washington's legislative and executive branches will now be controlled by Democrats, just as in Oregon and California.

NEW JERSEY: "Democrat Phil Murphy, a former banker and first-time candidate, won the New Jersey governor’s race by 13 points over Chris Christie’s lieutenant governor. That’s on par with Clinton’s margin a year ago, but it’s a remarkable turnabout from four years ago — when Christie got reelected with a 22-point margin of victory. It means that Democrats will have unified control of the Garden State’s government," Hohmann reports.
Written by Heather Chapman Posted at 11/08/2017 01:59:00 PM