Crude-oil derailment in southern Quebec kills at least 5; about 40 missing, 30 hours after blast 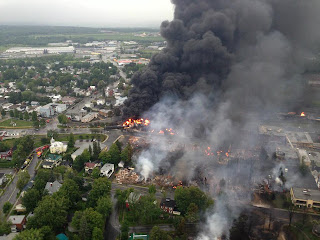 UPDATE, July 8: The death toll is now 13. The Wall Street Journal reports the disaster "threatens to ratchet up scrutiny of rising crude-by-rail shipments on both sides of the U.S.-Canada border, amid a boom in North American oil production" and the debate over Trans-Canada's Keystone XL pipeline for Canadian tar-sand oil. (Sûreté du Québec photo)

At least five people are dead, 2,000 evacuated and 40 buildings destroyed following the derailment of an unmanned crude-oil train in southern Quebec. "About 40 people are reported missing, according to the Sûreté du Québec," the provincial police, The Montreal Gazette reported this morning. "That number could go up or down at any time."

The train had been parked six miles from the town but got loose. "Somehow, the locomotive’s air brakes appear to have failed, allowing the train to roll forward under its own weight, the Gazette's Christopher Curis writes. "The freight train then rapidly gained momentum as it travelled down a slope in the tracks, derailed and exploded near downtown Lac Mégantic. There are fail-safes in place to ensure no one could have tampered with the brakes or the train’s controls, according to a spokesperson for the company that owns the locomotive," the Maine--based Montreal, Maine & Atlantic Railway.
The rail line runs from Montreal through Maine to Saint John, New Brunswick. It carries crude oil from the Bakken field in North Dakota to a refinery at Saint John, reports Tux Turkel of the Maine Sunday Telegram. "Strong opposition by environmental activists has stalled the construction of new pipelines to move the oil to North American refineries, and that has created an opportunity for freight railroads. But the new activity also carries some risk," such as a list of accidents Turkel cites in his story.

UPDATE: The disaster hasn't kept Lac-Mégantic’s local weekly newspaper, L’Echo de Frontenac, from publishing, reports Jacques Gallant of The Toronto Star. The paper's website, which is in French, is here. Outside journalists were given a tour of the blast area Tuesday, July 10; "the experience was overwhelming," Christopher Curtis of The Gazette in Montréal reports.
Written by Al Cross Posted at 7/07/2013 02:40:00 PM