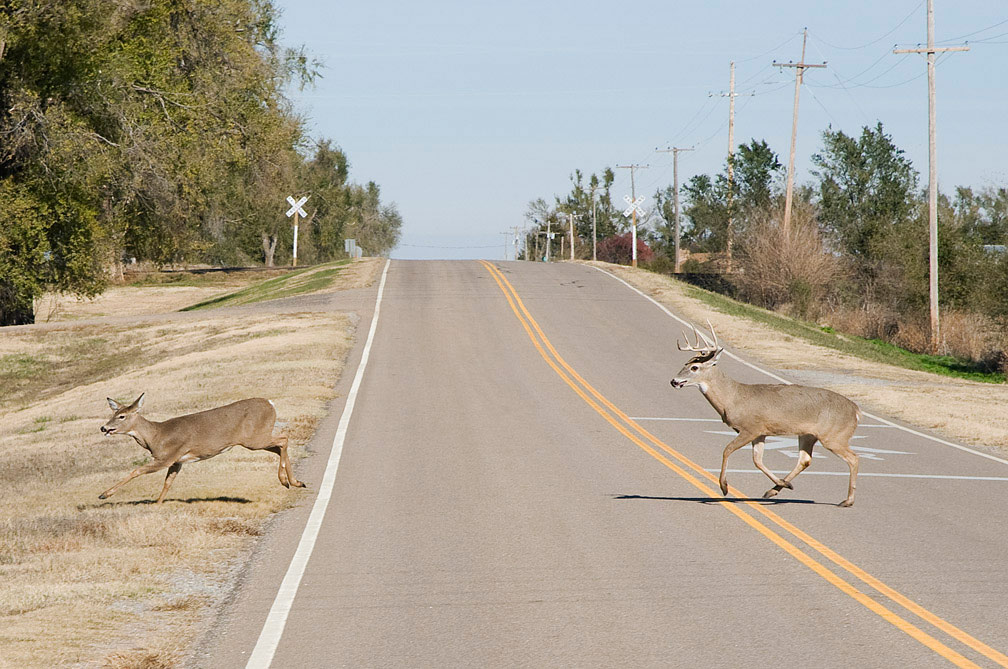 Rural roads are getting more dangerous, and drivers are being cautioned to pay extra attention now that it's that time of year when deer are more likely to wander out into the middle of the road. "October and November coincide with increased deer movement because it is the animals’ mating season and also the hunting and harvesting season," reports the Jefferson City News Tribune. (Kansas Highway Patrol photo)

Last year in Indiana, 15,000 car-deer crashes were reported, said Indiana State Police Sergeant Joe Watts, Hunter Petroviak reports WTHI-TV in Terra Haute. "Watts says some tips to stay safe include using high beam lights when possible, watching for the reflection of eyes in the road and making a mental note that typically if there is one deer, there are more with it."

In 2013 Missouri had 3,498 reported vehicle crashes involving deer, leading to 303 injuries, writes the Jefferson City News Tribune. Most accidents occur between 5 p.m. and 7 a.m., deer typically travel in groups and deer crossings are more likely near streams or wooded areas surrounded by farmland.

North Dakota has about 500 deer-vehicle collisions in 2013, resulting in $1.4 million in claims to repair vehicles, reports KQCD-TV in Dickinson. Drivers are better off bracing for an accident instead of swerving, said Jeb Williams, chief of the wildlife division of Game and Fish. He told KQCD, "Anytime you swerve to avoid something, especially if you're going at a high rate of speed, that you're increasing your chances to collide with somebody else or you're increasing your chances to roll that vehicle."
Written by Tim Mandell Posted at 10/14/2014 02:02:00 PM