In rural Virginia a World War II-era cannery is still plugging away and drawing visitors from all over who want the opportunity to can their own foods. The community cannery in Keezletown is equipped with "industrial-grade canning equipment available, for a small fee, to anyone who wants to can a lot of food a lot faster than could be done at home," Andrew Jenner reports for Modern Farmer. 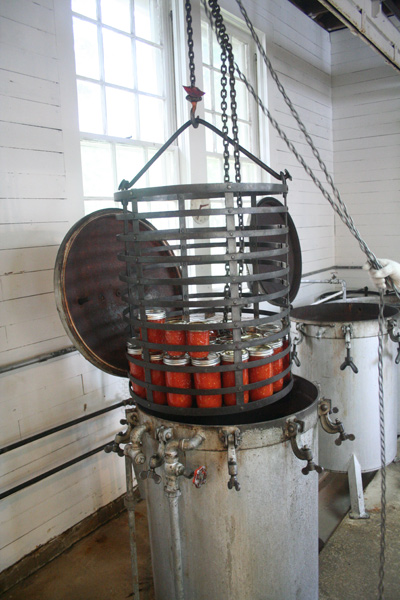 The Keezletown Community Cannery "opened in 1942, during the World War II 'Victory Garden' push to encourage the American public to become more self-sufficient while so much food was being sent to feed soldiers overseas," Jenner writes. "By the end of the war, according to a 1977 USDA publication, there were more than 3,800 community canneries in the country." The Keezeletown Cannery claims to be the only World War II-founded cannery still in operation. (Modern Farmer photo: The Keezletown Community Cannery pressure cooker)

"Most canneries were supported by local governments, and most eventually closed their doors when those county governments pulled funding for one reason or another at some point along the way," Jenner writes. The Keezletown Cannery faced the same fate in 2009, before local nonprofit Horizons Learning Foundation took over operations, keeping the cannery open mostly on donations. (Read more)
Written by Tim Mandell Posted at 10/15/2014 04:33:00 PM