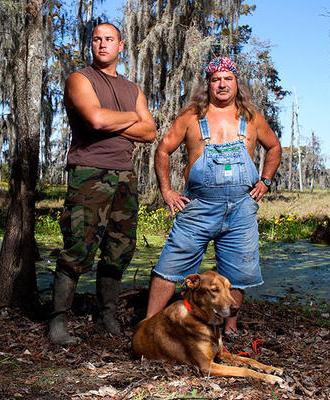 Rednecks, hillbillies and white trash continue to rule reality television. Led by "Swamp People," which "has become one of the most popular shows on what is called the 'redneck reality TV' circuit—the burgeoning number of cable programs about rural Southerners living primal forms of existence," Patrik Jonsson reports for The Christian Science Monitor. "While America has always been fascinated by its share of backcountry bumpkins—think 'The Beverly Hillbillies' in the 1960s—the new shows are about real people doing seemingly unreal things in a modern world."(History Channel photo: Ron and Bruce Mitchell, stars of "Swamp People.")

"As a new television season kicks off, series about strange subcultures of survivalists or blue-collar families, many of them with Spanish moss beards and grins that need some dental work, appear at almost every click of the remote," Jonsson writes. "There are 'Yukon Men' who confront the bestial elements 60 miles from the Arctic Circle, tuna fishermen who war off the coast of New England and 'Mountain Men' who navigate America’s uninhabitable ranges."

"The rise of redneck TV has paralleled one of the toughest economic stretches for the American worker since the Great Depression, a time of polarized politics and economic data that shows the middle-class dream is slipping away," Jonsson writes. "Some experts believe this malaise has pushed Americans toward the visual equivalent of escapism and comfort food."

"Of course, some of these laughs come at the expense of the redneck life and its peculiar progenitors," Jonsson writes. "Critics see the genre as glorifying backwardness and perpetuating stereotypes, particularly of the South. But others respect many of the characters on these shows for what John Nolte, writing on Breitbart.com, calls their masculinity and independence. In fact, he says, people like Mitchell mostly come across as 'selfless and surprisingly decent.'”

Robert Thompson, director of the Bleier Center for Television and Popular Culture at Syracuse University, told Jonsson, “There have been these types of good old American characters from the get-go. These are the people who picked up pitchforks and muskets and fought the Revolution. Our identity came from giving up all those fancy-schmancy European cathedrals and art museums in order to come here to wrestle bears and put up sod huts. This is deep in American mythology.” (Read more)
Written by Tim Mandell Posted at 10/13/2014 01:48:00 PM